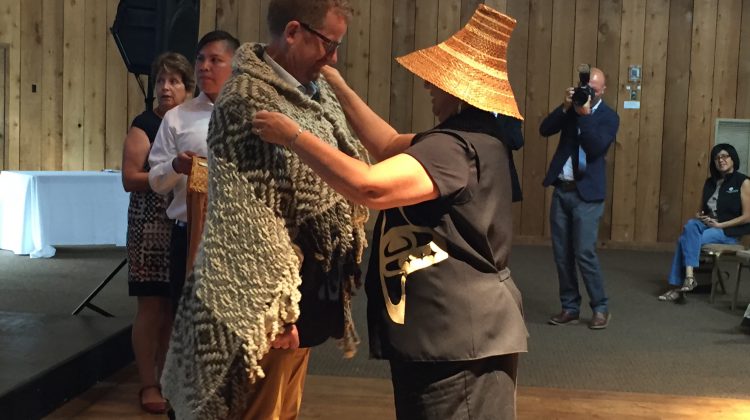 BC Health Minister Terry Lake participating in the blanketing ceremony.
Cowichan Tribes First Nation is launching a new personal health record initiative to increase access to primary care for 400 members. The pilot project will allow patients access to their own health records online, where they can receive lab reports, check vital signs, and direct message their health care providers.

Cowichan Tribes and Mustimuhw Information Solutions is partnering with McKesson Canada’s RelayHealth for the project.

BC Health Minister Terry Lake was on hand at the announcement on Tuesday. He says this is a 21st-century way of engaging patients and allowing them to be a part of their own health care.

Cowichan Tribes Chief William Seymour says this system will improve access to a lot of members.
Executive Director of the Cowichan Valley Division of Family Practice Valerie Nicol says the potential of this project is huge.
Toni Williams is a member of Cowichan Tribes, and says this project is really exciting for her family of four. She says many members of the community move around the Island quite a bit, so this new project will help with the consistency of medical information.
This project, called “Closing the Circle of Care” honours the Cowichan Tribes’ teachings and approach to care by working together as a community for improved health and wellness.