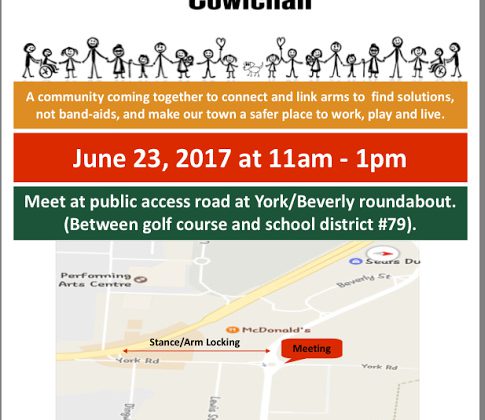 This Friday, Stand Up Cowichan will hold a very public event.

Supporters can park at the Sportsplex, walk over to the Beverly/York Road round-a-bout where they will stand arm in arm between the Quamichan Campus and the Cowichan Secondary School campus in a show of solidarity.

One of the organizers, and founding member of Stand Up Cowichan, is Sarah Senkow……
Senkow says since the Stand Up Cowichan group was founded, about two weeks ago, they’ve been getting an education on addictions and community safety issues in the Valley and while that’s ongoing, she says they haven’t decided exactly where the new group will go from here…..
She says she is convinced, however, the link with the community is something that was missing.