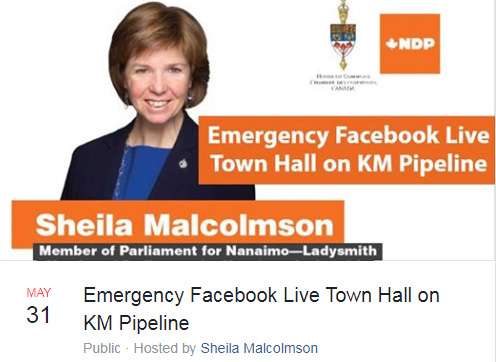 The MP for Nanaimo-Ladysmith says her office has received dozens of phone calls, emails and social media comments from constituents after the Federal Liberals announcement earlier this week.

The Trudeau Liberal government plans to spend 4 and a half billion dollars of taxpayers money purchasing some of the Canadian assets of Kinder Morgan related to the proposed pipeline expansion.

Sheila Malcolmson says Justin Trudeau and Liberal BC MPs were elected on a promise to respect First Nations relationships, to get community consent, and to re-do the flawed National Energy Board review and they have broken these promises.

Malcolmson is hosting a live emergency town hall on her Facebook page tonight (Thurs) beginning at 6 on the matter.