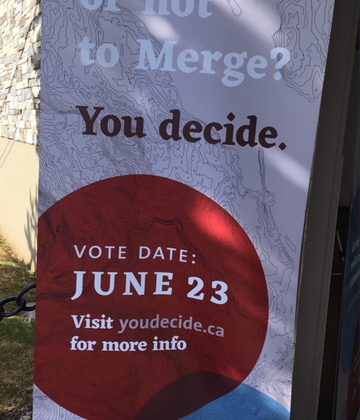 Amalgamation open houses this week are a chance to learn more prior to the referendum, June 23rd.
The preliminary results for the amalgamation vote are in, and residents in Duncan turned it down.
That means it’s the status quo.
Mayor of Duncan, Phil Kent says it’s hard to put your finger on, exactly, why City residents turned down amalgamation….
North Cowichan residents, who turned out to vote, were overall in favour of the two sides joining forces.
Mayor of North Cowichan, Jon Lefebure says he’s not surprised the results, in particular, areas of the municipality, showed residents were in favour…..
Voting places, where the vote favoured amalgamation, were around Ecole Mount Prevost, the Quamichan Campus of Cowichan Secondary School, and Maple Bay.
Voting places that garnered more votes against amalgamation were in Chemainus and Crofton.
Lefebure says despite the results, and the estimated 300,000 dollar cost of the process, the exercise was a valuable one.