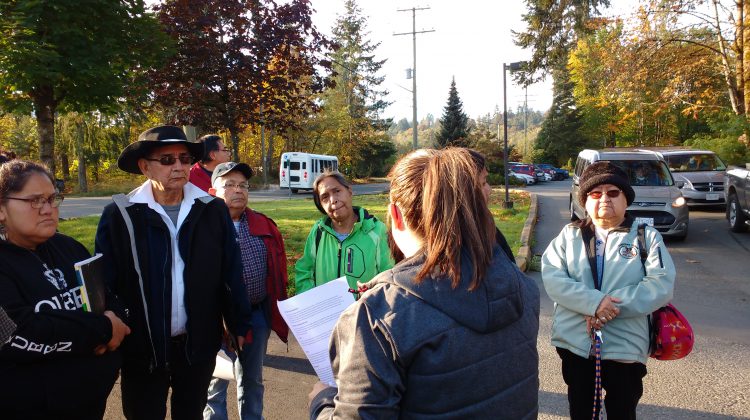 Cowichan Tribes Elder Sam Wilson led a group of about 20 people in a protest outside the tribes’ administration office earlier today.

People were concerned over a number of issues on the reserve land, including certificates of possession, and taxes.

Wilson says tribes’ members are being evicted from their homes on the reserve.

“Housing is a crisis on the reserve and our houses are being boarded up,” said Wilson.

Chief William Seymour says evictions only take place when someone fails to pay their rent for an extended period of time.

“If you live anywhere else, other than the reserve, if you miss one payment you’re kicked out,” said Seymour. “We have a little better leeway here, sometimes we go as far as six months without any rental payments before we start seriously talking about evictions. It’s not something that happens because we don’t like somebody.”

Seymour says the land is inherited on the reserve and Cowichan Tribes won’t take anyone’s land away from them.

During the protest, tribes’ members spoke with councillor Stephanie Charlie about issues ranging from child welfare to housing, and taxation issues.

Wilson says the idea was to force a shut down of administrative services in the hopes of fixing some of the problems.

“The plan is to ask them for the shut down of the administration for a day, so we can deal with these issues,” said Wilson. “We can’t have all these interruptions.”

Chief William Seymour responded by saying that these people are upset and making it sound like council won’t meet with them and that’s simply not the case.

“Chief and council have met with these families on three occasions,” said Seymour. “These families come in, if I’m here, I see them, the general manager sees them, so they’re not getting turned away.”

“They’re making it sound like we won’t meet with them,” said Seymour. “We’re meeting with them, we’re listening and we have our policies as well, that we follow.”

Seymour says the protestors want us to deal with issues surrounding housing, education, health, or land issues immediately, but these issues take time to improve.

He says management and council work in collaboration.