Legislature Protest, a Show of Solidarity 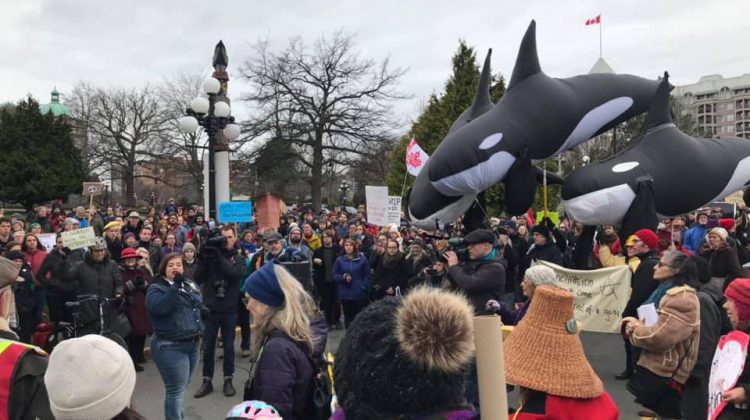 Like many other parts of the country, the legislature in Victoria was the site of a protest recently, where many British Columbians showed solidarity toward the members of a First Nation near Houston.

That’s where RCMP officers arrested 14 protesters for failing to obey a court injunction involving the removal of a blockade. However, First Nations groups have now agreed to take down that blockade.

First Nations groups are still against the construction of the Trans-Canada Coastal Gaslink pipeline project, which would go right through the territory and Cowichan Valley Green Party MLA Sonia Furstenau said action toward reconciliation is crucial.

“It’s not enough to say, ‘it’s up to the company to get the work done,’ this really needs to be government to government conversations that are happening,” said Furstenau. “We need to see more than just talk of reconciliation, we need to see action.”

The Green’s Adam Olsen joined Furstenau at the BC Legislature to speak at the protest and Furstenau said it’s time to write a new chapter, where conflicts like this aren’t a reality.

“The need for moving forward as quickly as possible with legislation of the United Nations Declaration for Rights of Indigenous Peoples, which will give a legal framework that will help us move away from the story that happens over and over and over again in Canada,” said Furstenau. “It’s the story of these conflicts that happen on the ground, on the territories of Indigenous people.”

The pipeline in question would run from Dawson Creek to Kitimat.