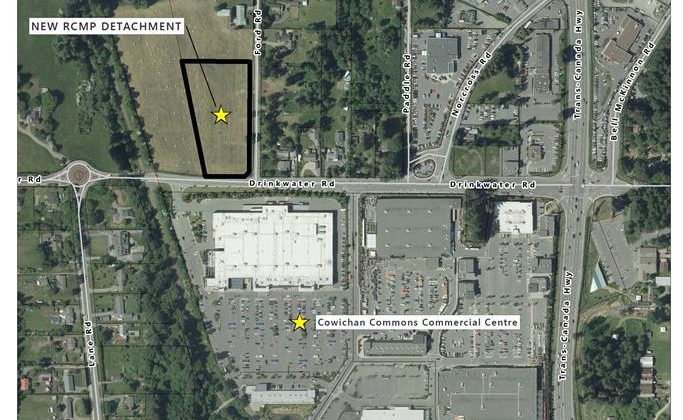 The new North Cowichan/Duncan RCMP detachment will be located at the intersection of Drinkwater Road and Ford Road.

North Cowichan Mayor Al Siebring recalls visiting the existing building in 2009 after he was first elected as a councillor and he remembers how cramped the Canada Avenue location was back then.

The new building will bring together local RCMP members, Forensic Identification Services, South Island Traffic Services and First Nations Policing and Siebring said there has been a number of delays in getting this project off the ground.

“We need a new detachment building, we were hoping to start this process as early as 2012 or 2013, but we faced constant delays (and I’m not casting aspersions), its taken time for the feds and the province to step up in terms of their contribution and what the thing would look like and how many members we would have,” said Siebring. “We also had some problems acquiring land, in terms of where to put this thing.”

The new detachment is subject to Federal Treasury Board approval and Siebring said the municipality has been given every indication that that will be a go.

“We’re taking out the debt, assuming we get elector assent later this year so we can construct the building,” said Siebring. “While that’s underway, we’ll iron out the actual operational funding side and I’m pretty optimistic that that’s not going to be a problem at this stage.”

With the new RCMP detachment to be built on Drinkwater Road, the North Cowichan portion of taxes may increase to as high as four and a half to five percent in 2020 and 2021.