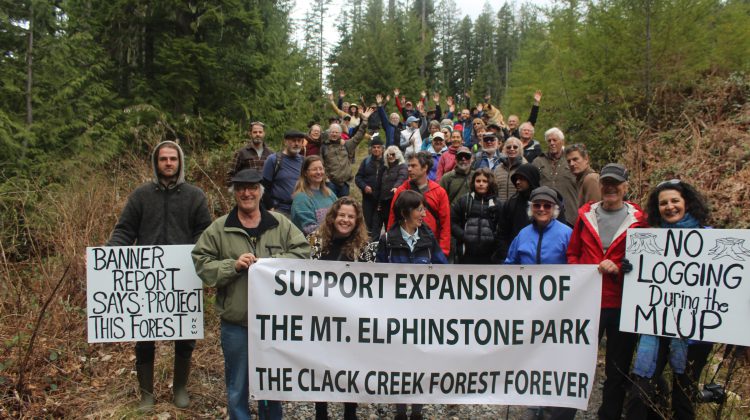 SUNSHINE COAST, B.C. – A conservation group is looking for public support in its efforts to keep old growth trees standing on the Sunshine Coast.

In a Facebook post, the non-profit, B.C.-based environmental group asked for letters be sent to Minister of Environment George Heyman and Minister of Forests Doug Donaldson “ASAP to save the Elphinstone Clack Creek Forest from being logged.”

The forest is located at Mount Elphinstone Provincial Park, near Roberts Creek, north of Gibsons.

According to ELF member Laurie Bloom, the main points for saving the Clack Creek blocks in the proposed Mount Elphinstone Park area are:

In a note to potential letter writers, the post notes, “You might speak to your own love of this area, and how the park proposal area is the lower coast’s last and only opportunity for a significant low elevation protected area, as the only large forested parks we have are mountaintop parks. You might say that our old growth is all but gone at lower elevations here but that these mature and natural forests have old growth characteristics and rich biodiversity and are the best of the last so should be preserved.”

ELF member Hans Penner said in the late 1990s, the area was identified as environmentally important, and a park proposal was made by a local group.

“But as a result, only three small parks got formed by the government,” Penner added. “(That’s) 140 acres. Ever since, attempts and initiatives have been carried on to connect those three small parks.”

Penner said the danger of the area being logged is “imminent.”

“ELF has been aware of this particular block for a number of years, probably about five years now, and we’ve objected for a number of reasons including not enough setback from streams, threatened rare plant communities, and other reasons,” Penner said.

He added that time is running out to voice concerns. “B.C. Timber Sales have kind of deferred for one reason or another, and adjusted some boundaries over the last few years, but now they’ve gone to the point of advertising it for sale with a closing date of April 30th, so that’s only a couple weeks from now.”

Penner hopes the letter writing campaign will make a difference.

“As long as it’s only advertised for sale, that means it’s not sold to a logging company yet,” he said. “That means that the government has the option of just basically cancelling this advertisement. They’ve done that before so we know that it’s possible. So we’re asking anybody that’s concerned about biodiversity of the natural forest on the lower coast here, to take this opportunity to contact Doug Donaldson, who can make that decision.”