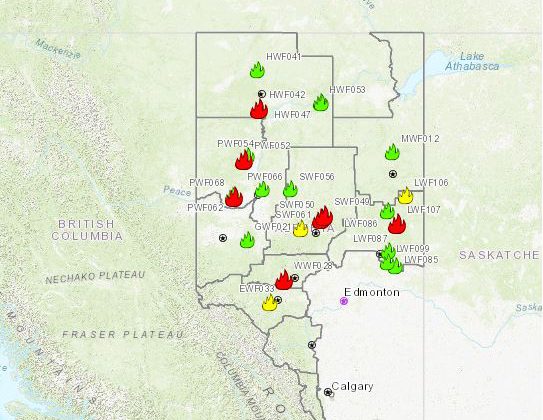 According to Coastal Fire Centre information officer Donna MacPherson, Alberta has asked for help from B.C to fight the fires that are currently burning in their province.

“From the coast, we’re going to be able to send two unit crews, one from the mainland and one from the island,” MacPherson said.

A unit crew is one made up 20 people.

The largest fire of note is the one that’s out of control in the northwestern part of Alberta.

As of noon on May 21st, the Chuckegg Creek fire in northwestern Alberta has grown due to warm temperatures and strong winds, and is 79, 805 hectares is size.

The fire is located roughly three kilometres south of the Town of High Level and remains classified as out of control.

Closer to home, much of the Coastal Fire Centre region remains at a low fire risk, although there are small pockets where the fire danger is moderate.

“In the north part of Vancouver Island, I’d say the area around Courtenay is mostly in low, but we do have a spot of moderate a little farther up the island in the north,” MacPherson said. 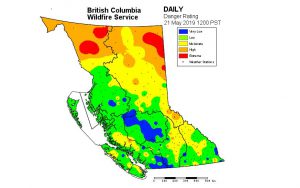 BC Wildfire fire danger map as of May 21st, 2019.
Map courtesy BC Wildfire

More unsettled weather and spotty showers in the immediate forecast eases the wildfire risk in the region.

However, MacPherson warns that the fire danger rating may climb again with the return of more hot and dry conditions into the weekend and early next week.

“We were considering putting in a (Level 2 open burning) prohibition this week but we thought we could hold off with the precipitation that we did get, but we may have to revisit that again at the beginning of next week,” MacPherson added.

And while it’s been fairly quiet on the wildfire front in the Coastal Fire Centre, MacPherson urges people to remain vigilant.

“It’s a very good opportunity right now with what’s going on in Alberta for people to give a really good think about what they can do on their own property to make it more resilient if a wildfire does happen,” she said.

It starts with ‘fire smarting’ their properties. MacPherson said bcfiresmart.ca is a “wonderful source to print off a little check-list.”

“You can walk around your property and rate it yourself and start tackling some of the things that might be putting yourself at risk,” she said.