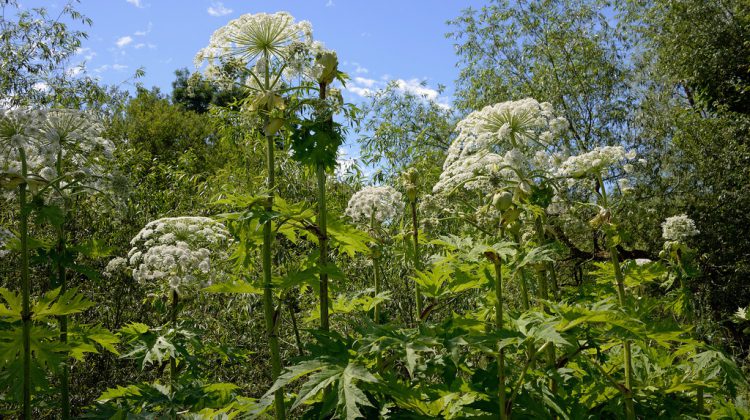 The Coastal Invasive Species Committee will be hard at work this summer treating for species like Giant Hogweed and Knotweed.

Executive Director, Don Hare said they do use chemicals in some cases but there are some effective alternatives.

“We’ve gone to stem injection and individual plant treatment so in all cases we are just using the minimum amount. We actually use very little herbicide when it really comes down to it across all our treatments when you add up our total. Our footprint is really, really small. It would be less than, probably, two per cent of the whole area that we have treated.”

Hare said when crews get into streams to beat down invasives it’s all shovels and clippers.

The Committee has had its sights set on a couple of hot spots for Giant Hogweed and Knotweed and not so much on Scotch Broom, although Hare said that plant is moving up the list.

“The biggest challenge with it is it is just so prolific and it just loves disturbed areas, so roadsides and forestry trails. It’s a high content oil wood and it’s extremely flammable.”

Hare says forestry companies are putting more effort into the control of broom because of the hazards it presents.

In the meantime, the Committee is celebrating some success when it comes to controlling Giant Hogweed.

Hare said they’ve been working to control the plant at the epicentre which is in the French Creek area for the last number of years and it looks like it’s working.

Hare said they’ll be turning their attention to the Cowichan Valley where Knotweed is a problem.

“They’ve got a couple of epicentres that have been there, basically putting Knotweed down in the whole Cowichan watershed so we addressed those last year and had very good efficacy on that one. So we are beginning to ultimately get control on the whole Knotweed situation in the whole of Cowichan rivers and Cowichan Valley.”

Hare said in the Valley they’ve also been working on keeping the Giant Hogweed under control as well.

“Last year we had all sites treated. So, we will continue to do that this year. There’s not very many but there’s about 15 that we have been keeping under control.”