Father’s Day at the BC Forest Discovery Centre 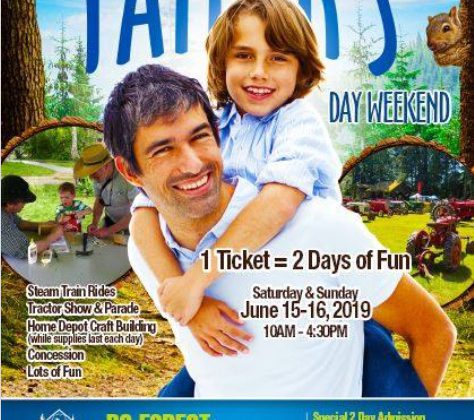 The BC Forest Discovery Centre is offering Dad’s admission for three dollars and Samson, the 108-year-old steam train will be running.

General Manager Chris Gale said there is a lot happening June 15 and 16.

“We have that huge Tractor Show and Parade, which is always fun, Home Depot is supplying crafts for the kids, they can actually build something for their Dad if they like, the concession’s open, with the big barbeque, and steam train rides of course,” said Gale.

Gale said when he first started, he wasn’t sure what to make of the Tractor Show and Parade but said it’s always a favourite.

“It’s kind of hard to explain; my first year here, I thought this was going to be the hokiest thing I’ve ever seen, but there [are] 50 or 60 really old, interesting heritage tractors down there,” said Gale. “Then they have a parade and they drive these tractors around and it’s so much fun, everyone has big smiles on their faces and they give people rides on the tractors.”

Don’t throw away your admission tickets after the first day, as it’s valid both days.

Children under two-years-old get in for free and the event runs from 10 am to 4:30 pm both days.