A New Weapon in the Fight Against Wildfires 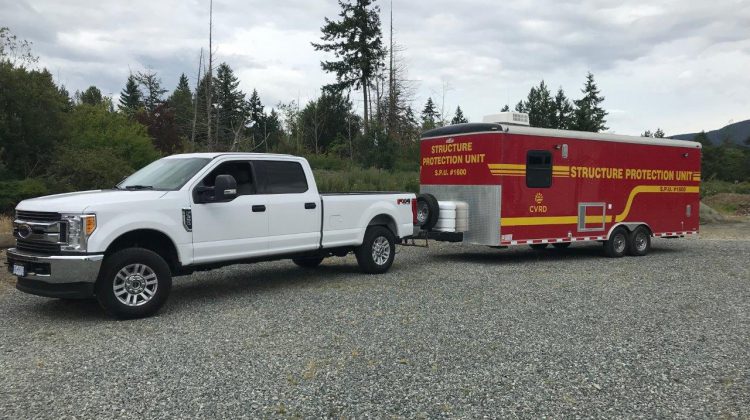 Structural Protection Unit available to the CVRD. Supplied by CVRD.

Since 1919, historical data has shown that about 90 percent of fires sparked within the Cowichan Valley Regional District are human-caused, creating the need for a structural protection unit.

The CVRD’s Type 2 Structural Protection Unit is the first of its kind in the region, it needs a team of 25 firefighters from 12 Cowichan Valley fire departments to operate, and this trailer is loaded with fire fighting equipment to help during interface fires.

It has four high-pressure pumps, more than 130 assorted sprinklers, more than four kilometres of hoses of different sizes, and personal protective clothing.

Fire Rescue Services Coordinator in the CVRD’s Public Safety Division Jason de Jong said this equipment doesn’t put out a fire, but it slows the spread of the fire.

“This trailer can be deployed, these sprinklers can be deployed on structures and with the sprinklers running with the water, it increases the relative humidity in the area, making it difficult for a fire to start on the structure,” said de Jong. “It wets down the potential fuels around the houses, so the fire would still probably pass through, you’re not putting out the fire, but you’re simply protecting the structures that you’re intending to protect.”

“The trailer has a team that was formed through our office,” said de Jong. “It has 25 different firefighters from 12 different fire departments in the Cowichan Valley and if there’s an activation of the trailer and this team would assemble to deploy to an area to triage and perform a sprinkler protection operation.”

Click here for more information about emergency management and preparedness in the regional district, including emergency alert registration and volunteer opportunities.