CVRD and its Partners Receive Money for Study 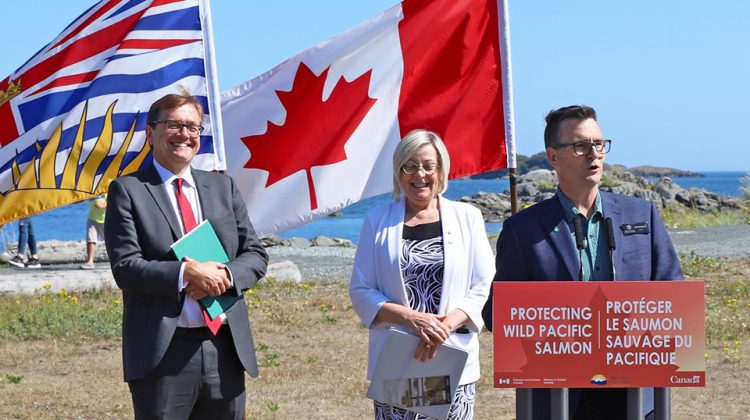 CVRD Board Chair Ian Morrison speaking at funding announcement. Supplied by CVRD Facebook page.
The 2019 drought season has prompted the Cowichan Valley Regional District to conduct some of the leg work ahead of raising the Cowichan Weir.
The CVRD and its partners are looking for a long-term water supply solution for the Cowichan River and the Department of Fisheries and Oceans and the province have approved funding to conduct a feasibility study.
The current phase involves determining the natural boundary of Cowichan Lake to conduct private property impact assessments.
CVRD Board Chair Ian Morrison said there are many questions that need to be answered before seeking help from the federal and provincial governments in funding the replacement of the weir.
“What will the impacts of having storage in the lake, higher than its been in the past and for a longer period of time, will that impact water from property owners?” said Morrison. “Is the current location of the weir, the right place to put a new weir.”
Morrison continued, “Those kinds of questions, which are going to involve professionals are what is being sought to gain that knowledge for making decisions about what it will look like, how much it will cost for when we go and ask for the senior governments’ money?”
This study will allow the Cowichan Valley Regional District, Cowichan Tribes, Paper Excellence and the Cowichan Watershed Board to determine the feasibility of increasing water storage levels in Cowichan Lake to help provide more sustainability in the Cowichan River system.
The CVRD, Cowichan Tribes, Paper Excellence, and the Cowichan Watershed Board put forward a multi-party proposal to the BC Salmon Restoration and Innovation Fund (BCSRIF) in the amount of $4 million dollars.
Morrison said taxpayers aren’t going to get hit with the bill.
“We’re looking at somewhere in the range of a million dollars in the first year, it’s going to be costly, fortunately, this doesn’t fall on the backs of the local property taxpayers, this is funding from the BCSRIF program, which was tailor-made for this kind of work.”
The first phase involved developing detailed engineering designs and permitting for a new weir, along with strategies to remove the existing one.