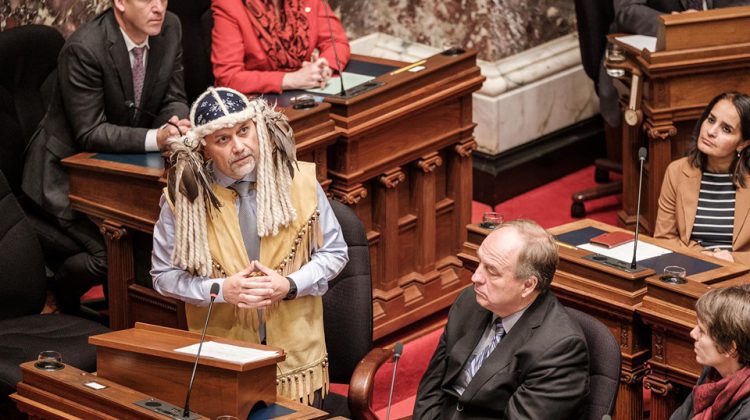 The legislative assembly moved first reading on the Declaration on the Rights of Indigenous Peoples Act. Supplied by Sonia Furstenau Facebook page.

New legislation will recognize Indigenous human rights in BC law and the Chief of Cowichan Tribes calls it a step in the right direction.

The legislation was introduced in the BC legislature late last week and there are still a few readings.

If this legislation becomes law, BC will be the first province in the country to bring the United Nations Declaration on the Rights of Indigenous Peoples into law.

Cowichan Tribes Chief William Seymour said there is a lot of work to do and the hope among First Nations has long been the development of government-to-government relationships.

“Everything we look at and everything we’re trying to accomplish, you know, our housing issues, water issues, education, economic development, treaty relations, forestry, and land issues, it’s about how to move forward with it,” said Seymour.

“Historically, we’ve always been told ‘if you want your rights recognized, take us to court,’ ” said Seymour.

One key feature of this legislation is that there will be discretion for new decision-making agreements between the province and Indigenous governments where those decisions directly affect Indigenous peoples.

Seymour said this is a good step.

“We’re always asking for a government-to-government relationship and through Bill 41, this declaration is going to be a good step in the right direction,” said Seymour.

Bill 41 carries with it a requirement to develop an action plan to meet the objectives set out in the UN Declaration, in collaboration.

The commitment to the adoption of the UN Declaration in BC is part of the Confidence and Supply Agreement with the BC Green Party.