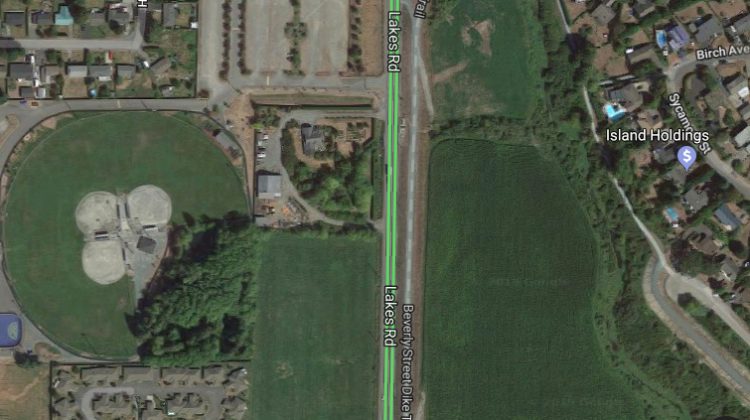 Flood Training Drill planned for Friday between 10:30 am and 1 pm. Supplied by Google Maps.

Municipality of North Cowichan crews will be conducting a flood training drill from 10:30 am to 1 pm tomorrow on Lakes Road and Beverly Street.

Since the flood of 2009, North Cowichan and its partners have invested in infrastructure meant to prevent flood damage.

Dikes have been raised, new dikes and new pump stations have been built and gravel and log jams have been regularly removed from the Cowichan River.

“What we have to do is put in four sections of the steel partitions and they’re three high,” said Cator. “They’re installed at that location, there’s a specific sequence that the structures have to go together, so crews will be putting those sections together, making sure they know which sections go in which spots.”

Cator explains the importance of this project.

“It’s a section of steel that continues the dike wall to prevent flooding of the downtown area. It is the installation of the steel barricades at that location to prevent water from coming through that intersection into the downtown area,” said Cator.

There are three gaps in the diking and pumping systems that accommodate roads at Canada Avenue, the Trans-Canada Highway, and Lakes Road.

Flaggers and a crane truck will be on site.

Since the flood of 2009, North Cowichan has taken major strides to prevent flooding.