Salmon farmers partner with Food Banks BC to donate equivalent of 200,000 meals 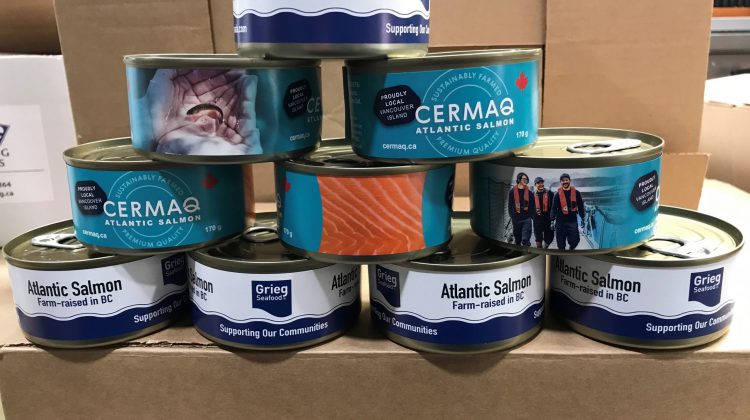 The BC Salmon Farmers Association is stepping up to help feed families during the pandemic.

It’s partnering with Food Banks Canada and Food Banks BC to create the salmon donation initiative.

Cermaq Canada, Grieg Seafood BC, Mowi Canada West, Creative Salmon and Golden Eagle Aquaculture are donating roughly 60,000 pounds of salmon to food banks that are seeing increased demand due to the crisis.

Cermaq Canada is donating approximately 62,000 cans of salmon, with Grieg Seafood donating 24,000, and Mowi contributing more than 16,000 pounds of fillets.

“This is a time for all industries to step up and support those most affected by COVID-19, and that’s exactly what BC’s salmon farmers are doing,” said BCSFA executive director John Paul Fraser.

“Working with Food Banks BC, we’re delighted to partner with BC-based businesses to can, process and transport fresh BC farm-raised salmon, providing families with healthy protein produced here in the province.”

Every month, food banks in BC help nearly 100,000 people, and an increase in demand is expected to last beyond the pandemic.

“In some instances, numbers have already doubled and we’re seeing lineups grow longer, yet food donations are down. Some people who were donors are now food bank recipients,” said Food Banks BC executive director Laura Lansink.

“It’s a very stressful situation for our food banks and we anticipate we will feel the repercussions of this for one or two years into the future.”

Due to the pandemic many food banks are shifting their distribution towards pre-packaged, shelf-stable foods that require less volunteer or client handling of products.

To accommodate this request, this BC salmon farmers’ donation will include:

Together, this industry donation will supply the equivalent of over 200,000 meals to British Columbians.

“I have been with Food Banks BC for almost a decade and I have never received a donation like this before,” Lansink said.

“Protein donations truly are hard to come by, so we are so grateful to BC salmon farmers for stepping up, particularly at this time of COVID-19 when food, and especially protein, is in such short supply. This donation will make a tremendous impact on the individuals, families and children who simply can’t always afford to put food on their tables.”

Cermaq Canada managing director, David Kiemele, said that being identified as an essential service by both the federal and provincial governments, the industry is fortunate to be able to continue forward with its farming.

He added that they are responsible for supplying the markets and families with salmon during this time of change and uncertainty.

“We are also aware that many families are feeling the financial implications of the current Covid-19 pandemic, and we are happy to be able to give back to local communities by supplying food banks with 30,000 pounds of locally and responsibly grown Cermaq salmon,” Kiemele said.