Canada sees pandemic growth slowing; could see 3,833 deaths by May 5 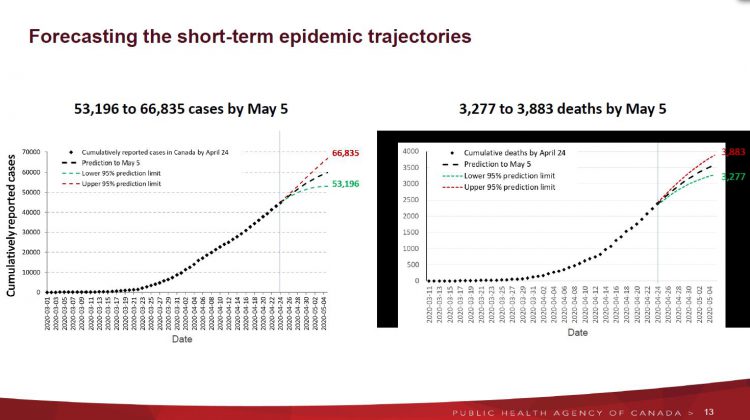 More than 80-percent of Canada’s confirmed COVID-19 cases are in Ontario and Quebec.

Dr. Theresa Tam says although the growth rate previously doubled every 3 days early in the epidemic, the number of cases in Canada is now doubling every 16 days.

She confirmed the initial models underpredicted the number of deaths because of the sudden spike of regional outbreaks in long-term care homes.

According to today’s federal modeling, consistent and strong epidemic control would result in up to 10-percent of the population infected. That’s nearly 4-million Canadians.

Weaker epidemic control would see up to half the Canadian population infected.

Dr. Tam was quick to remind Canadians that models are not crystal balls, they do not show the future but rather help drive us to the best outcomes.

Tam says currently each infected person passes the virus to roughly two people, a number that has to go down to less than one person before public health measures are eased.