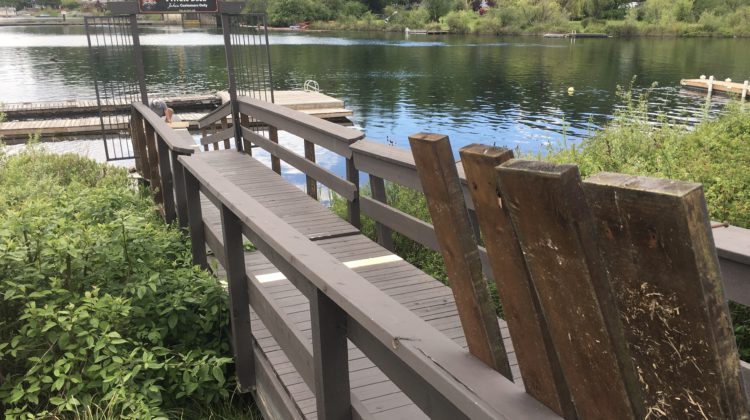 Repairs are underway on the Jake's on the Lake dock, used by The Tube Shack to launch tubes.

An idyllic afternoon spent floating down the Cowichan River on a tube may be back on the list of things to do this summer.

Aaron Frisby, owner of the Tube Shack in Lake Cowichan, says they plan to make a presentation to council, asking it to reverse a decision to prohibit tubing this summer.

Lake Cowichan council voted in April to suspend tubing in 2020, with Mayor Rod Peters saying there was concern about potential problems with ensuring physical distancing.

At the time, Peters said the only solution was to shut it down.

He called it a difficult decision, but council had a responsibility to protect the citizens of Lake Cowichan.

According to Frisby, “All we have to do is streamline the process of people getting their tubes and getting on the water.”

He says that before the pandemic began, “about 50 percent of our bookings were online.”

Moving tube reservations totally online would allow them control customer arrivals in a way that should avoid violating the 50 person limit on gatherings and keep people two metres apart.

Frisby also says The Tube Shack can increase the frequency of shuttle trips carrying tubers back to town after floating down the river to ensure they are seated far enough apart.

“If the situation looks positive,” Frisby says they hope to renew liability insurance, deal with leases, and hire staff in time to launch at the end of June.

As for reports that people are already out tubing on the Cowichan River, Frisby says it’s hard to police it: “This is an island pastime, and it was for a long time before my operation started up, so I don’t think it’s going to stop if we’re not running.”

Frisby says due to the cancellations of the Laketown Shakedown and Sunfest music festivals, local businesses are facing a very difficult year without the crowds that are attracted by music festivals and the river tubing each summer in Lake Cowichan.