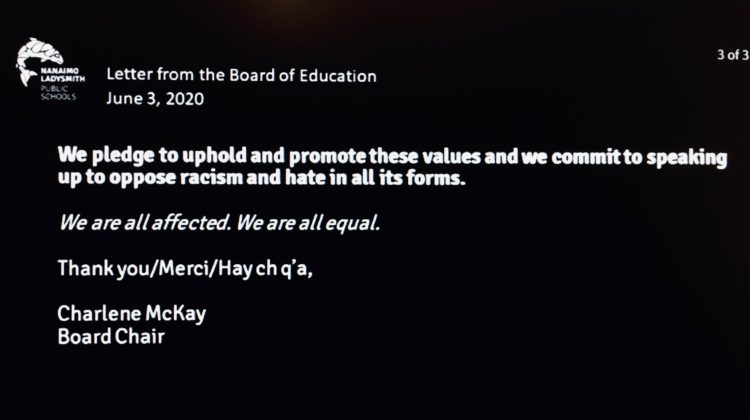 As protests and riots spread across the United States following the death of George Floyd at the hands of a white police officer in Minneapolis, the younger brother, and the cousin of a school principal in Ladysmith on Vancouver Island were gunned down in a vehicle on a street in Chicago.

Dionte Jelks is the principal of Ladysmith intermediate school, and as he dealt with the grief of losing his younger brother and another family member, the Nanaimo Ladysmith school district spoke out against racism in an open letter.

In its statement, School District 68 says it acknowledges racism exists and we are all affected in one way or another.

The district says by teaching and modeling the values of safe and inclusive communities schools are uniquely positioned to influence an equitable society free of racism and intolerance.

He says beginning with his first day of orientation in July of 2019, “the word that shines bright, you know, is ‘inclusion.”

Jelks says it makes him proud to be working, “and supporting students in this district and working with my fellow colleagues that really put inclusion, you know, as a stepping stone to equitable education.”

Jelks says the family is at a loss as to why his younger brother, Darius, and his cousin were shot while they sat in a vehicle at a traffic light.

He says another vehicle pulled up beside them and someone inside shot them, “and we’re still trying to figure out how, why, and who.”

Jelks says the support of his colleagues, the school district, and the community of Ladysmith is helping him with his grief.

“I can’t be happier with my NLPS family for having my back, and for advocating for all to speak up when they see injustices.”

On the question of how schools can play their part in ending racism, Jelks says it starts with our children, “It starts with teaching our kids how to love, how to accept others.”

He says there needs to be instruction and activities that involve racism, and show what it means to be a person of colour.

Jelks says if we teach our children about racism at home and in schools we can “create some dynamic leaders in this world to make a change.”