Systemic Racism, the Subject of a Virtual Town Hall 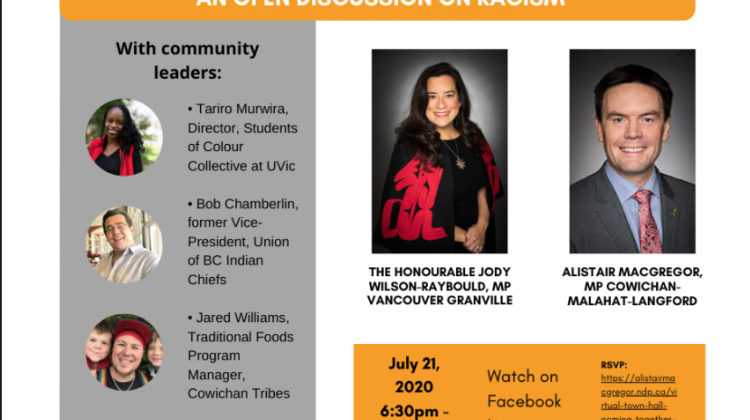 A discussion about systemic racism is set for tonight. Supplied by Alistair MacGregor for Cowichan-Malahat-Langford Facebook page.
2020 has shone a light on the issue of systemic racism and is the subject of a virtual public town hall tonight.
Whether it was the killing of George Floyd by a Minneapolis police officer, the protests that followed, or the incidents involving the police and minority groups in our country, systemic racism is front of mind, perhaps now more than ever.
To that end, Cowichan-Malahat-Langford MP Alistair MacGregor is hosting a town hall, Coming Together: An Open Discussion on Racism to address issues facing minority groups.
MacGregor will be joined by Vancouver-Granville MP Jody Wilson-Raybould, representatives from Cowichan Tribes, the Union of BC Indian Chiefs, and the Students of Colour Collective at the University of Victoria.
Wilson-Raybould, the former Attorney General was one of two MPs kicked out of the Liberal caucus due to blowing the whistle on the Prime Minister, who was at the center of the SNC-Lavalin scandal.
Participants can find instructions on how to take part by going to MacGregor’s website, where the Zoom conversation will also be live-streamed.