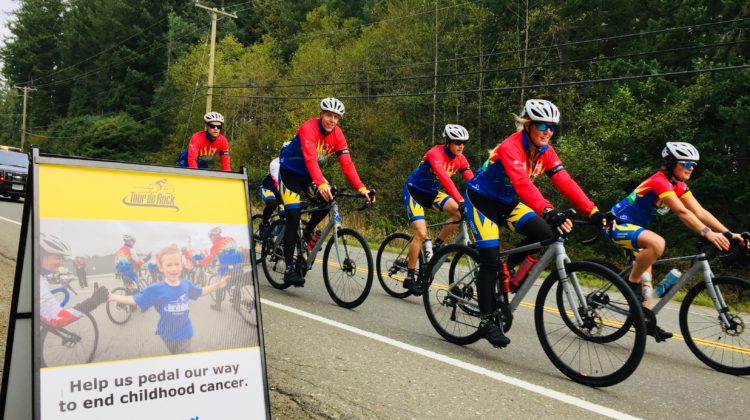 The Cops for Cancer Tour de Rock is going back in time.

The annual fundraising cycling journey in support of pediatric cancer research and support programs will have a different look, this year.

Anthony Gray, who is the team captain for the Campbell River to Courtenay leg, says we’ll be seeing some familiar faces.

“Because of COVID, you can’t really have a Tour de Rock team, because we can’t train them (and) social distancing is really difficult,” Gray explained. “So what the Canadian Cancer Society and the Tour de Rock steering committee came up with (was) ‘Hey, let’s invite alumni riders to come back and ride little portions of the ride.’”

Over the past 22 years, Tour de Rock has raised roughly $26 million, thanks to the support of Vancouver Island residents and the hundreds of first responders who cycle 1,200 km over 14 days across the island.

Gray says even though we’re in a pandemic, the kids with cancer and their families aren’t going to be put on the backburner.

“The kids don’t get to take a break because COVID’s here,” he added. “So we’re trying something to keep it going because we’ve still got to raise the money, we’ve still got to get the funds out there to help the pediatric cancer research and to send the kids to Camp Goodtimes.”

Gray is a father of two and says the cause hits home. “Unfortunately, I had to see my son in the hospital for a while, so seeing the kids’ faces in the hospital dealing with cancer. My son didn’t deal with cancer, luckily enough, (he) had other issues, but just seeing those kids, it’s a brutal thing to see, something you don’t want to see but you have to… it’s so brutal.”

The dream is to one day never having to do Tour de Rock because cancer has disappeared.

“But we will keep on riding until cancer is gone,” Gray said.

The first leg of the ride starts Sept. 23rd on the northern tip of the island (Port Alice, Port Hardy, Port McNeill, Woss and Sayward) before heading south.

They’ll be in Nanaimo on Sept. 27th and Cowichan Valley/Shawnigan on Sept. 30th.

The ride winds up in Victoria on Oct. 2nd.