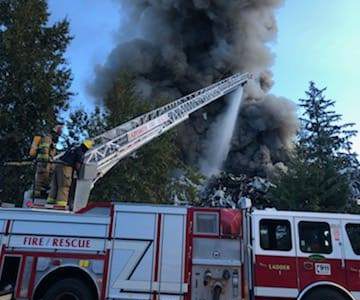 There is concern about groundwater contamination on properties near a major fire at a recycling yard south of the Nanaimo Airport.

The fire is now contained, but the thousands of litres of water used to bring it under control may have carried toxic chemicals onto the ground.

As many as 50 firefighters from eight fire departments from across the Cowichan Valley and the Regional District of Nanaimo spent much of the day fighting the fire that was burning in scrap metal and tires.

The fire was reported around 9 am this morning and the flames spread through a massive pile of recyclables, including car parts, plastics, and discarded pieces of packaging foam.

A column of heavy black smoke filled the air above Schnitzer Steel beside Highway-1, which was slowed to a crawl as a result of the fire.

For a time there was the potential for the fire to spread to nearby buildings, but a change in wind speed and direction during the afternoon lessened that threat.

At the height of the fire, people in North Oyster, Cedar and the Town of Ladysmith were asked to avoid water use as crews drew water from reservoirs to fight the fire.