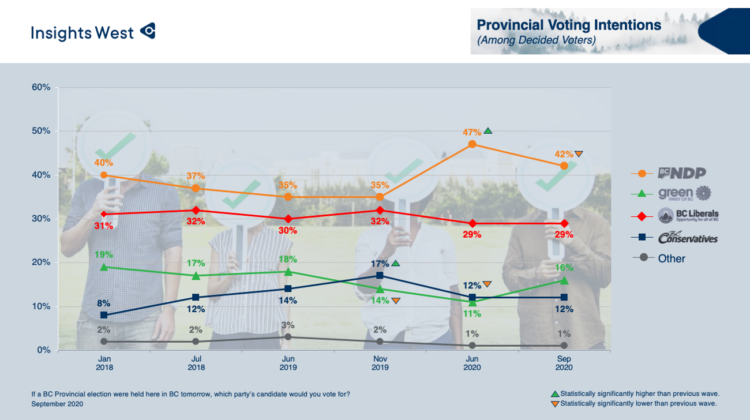 The public largely disapproves of NDP Leader John Horgan’s snap election call, but the decision to push ahead and seek an NDP majority in the BC Legislature may prove to be a successful gamble.

A new poll by Insights West shows Premier Horgan with a commanding lead even though a majority of British Columbians oppose the idea of the election taking place a year early.

Fifty-eight percent of BC residents are against it, including 30 percent who report being “strongly opposed” to the early election.

The 42 percent who support Horgan’s decision is comprised of 32 percent who “somewhat support” the idea, and just 10 percent expressing “strongly support” for the idea.

The vast majority of BC Liberal voters and BC Green voters oppose the early election call.

However, the NDP holds the early lead with 42 percent of decided voters.

The Liberals have 29 percent, the Greens are at 16 percent, and the BC Conservative party sits at 12 percent.

Insights West says the NDP is “leading in every demographic category and every region in the province.

Voter certainty is also strong for both the NDP and Liberal parties, with 61 percent of those who intend to vote NDP saying they are “very certain” and 65 percent of Liberal voters being “very certain.”

Slightly more than half of the decided voters say they will cast a ballot in-person.

The current pandemic has the parties altering their strategies to rally support online and make sure supporters mail in their ballots.

The Internet will play a major role as social media and virtual events will be the heavy hitters used to get each party’s message out, as well as using phone banks to reach out to voters.

Furstenau could be considered a veteran online campaigner as the BC Green Party leadership contest was suspended in the spring because of the coronavirus pandemic, and then continued over the summer with a virtual campaign.

Furstenau says her party is “hitting the ground running,” and ready to put forward an alternative to the kind of politics BC has seen “for too long.”

She continues to stress that NDP leader John Horgan’s picked the wrong time to call an election.

“This was not a time, when we have these emergencies, to put the ministers on the campaign trail, this was the time for them to be working with our provincial health officer and that’s what should be happening, but here we are and now the question is do we want more of this kind of politics that says we’re going to put our party fortunes ahead of the health and well being of British Columbians.”

She also stresses the coalition between the NDP and Greens was effective and solid, despite comments by Horgan that it was showing signs of instability.

Douglas is a community activist and is well known as an advocate for working people and on local issues.

Douglas says he’s worked to “address some of the biggest challenges facing our community, including taking action on the housing crisis, defending the environment, and advancing meaningful reconciliation with First Nations.”

The Liberal party is running Tanya Kaul, a recreation programmer with the Cowichan Valley Regional District in Lake Cowichan.

Kaul posted on Facebook that it’s time to find alternative solutions to the growing homelessness in the valley and make sound environmental decisions to protect natural resources.

The vote is being held on October 24, but a large number of people are expected to use mail-in ballots.

Elections BD says Voting by mail is a good option for voters who are not comfortable going to a polling station because of the COVID-19 pandemic.

Contact Elections BC to request a vote-by-mail package as soon as possible.

Elections BC says people don’t need a special reason to vote at advance voting making it an option for all voters.