People Worried the Worst of COVID-19 is Ahead 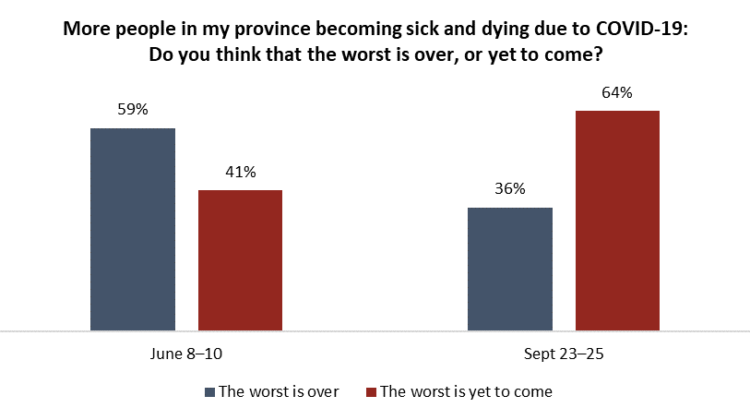 The increasing number of COVID-19 infections and the talk of a virus surge this autumn has people feeling much more anxious and concerned.

A survey by the Angus Reid Institute finds that two-thirds of Canadians are worried the COVID-19 pandemic is worsening.

Sixty-four percent of people believe the worst of the health impacts are yet to come.

That is considerably higher than in June when two-thirds of people had the opposite belief and felt the worst was over.

Seven-in-ten Canadians now say they are concerned about personally contracting COVID-19, up from a low-point of 46 percent in early June.

Thirty-five percent of Canadians over the age of 54 now say they are “very concerned” about becoming sick, up from 14 percent in early June.

Seventy-three percent now say they feel the worst of the economic impacts is yet to come.

While a little more than half of Canadians say their mental health is good, the challenge of fighting depression is difficult for people under the age of 35.

More than one-third of both men and women in this group saying they are struggling.

Thirty-four percent of women between the ages of 35 and 54, which the Angus Reid Institute says is the demographic most likely to be caring for children and other family members, say that their mental health is bad.