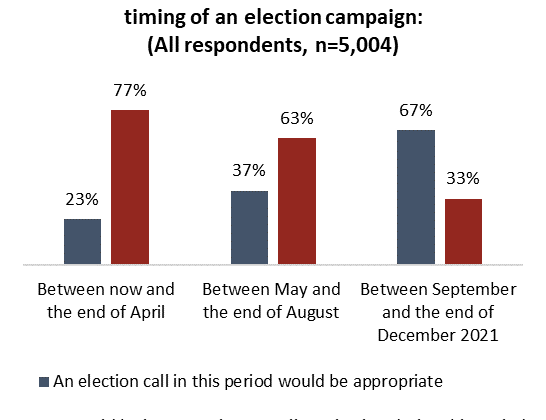 Having a spring or summer election in Canada would be overwhelmingly unpopular, but two-thirds of Canadians say going to the polls between September and December would be acceptable.

A new survey by the Angus Reid Institute found that Canadians are focused on the end of the pandemic and consider a spring election to be too early.

Two-thirds also say calling an election for the summer would be inappropriate.

The Conservative Party of Canada will hold a policy convention this week and the Angus Reid Institute says that only “29 per cent of Canadians have a favourable view of Erin O’Toole, while positive perceptions of Justin Trudeau and Jagmeet Singh hover in the mid 40’s.”

That sentiment is led almost entirely by past Conservative voters (88%), while at least one-in-three past NDP and Green voters agree that a change in government is needed.

Less than 20 per cent of those who supported the Liberals in 2019 say it’s time for a change.

Overall, 35-percent of Canadians disagree that a different governing party is needed.

Other findings of the survey: