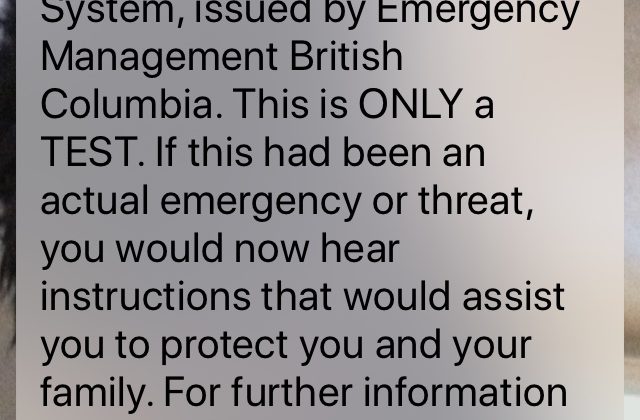 Make sure your phone is up to date because tomorrow the province is testing its Alert Ready system.

That means phones, along with other things like radios and TV’s will ring around 1:55pm PST.

When they do, you’ll hear and see the following message:

“This is a TEST of the British Columbia Emergency Alerting System, issued by Emergency Management British Columbia. This is ONLY a TEST. If this had been an actual emergency or threat, you would now see or hear instructions that would assist you to protect you and your family. For further information go to www.emergencyinfobc.gov.bc.ca This is ONLY a TEST, no action is required.”

Alert Ready is a Canada-wide system that allows the government in each province and territory to send out public safety alerts through major television and radio broadcasters, as well as compatible wireless devices.

This system is only used during large-scale disasters or emergencies where loss of life is possible or imminent and tomorrow’s alert will be a test in honour of emergency preparedness week.

To see if your phone is compatible with the system, visit the Alert Ready website.