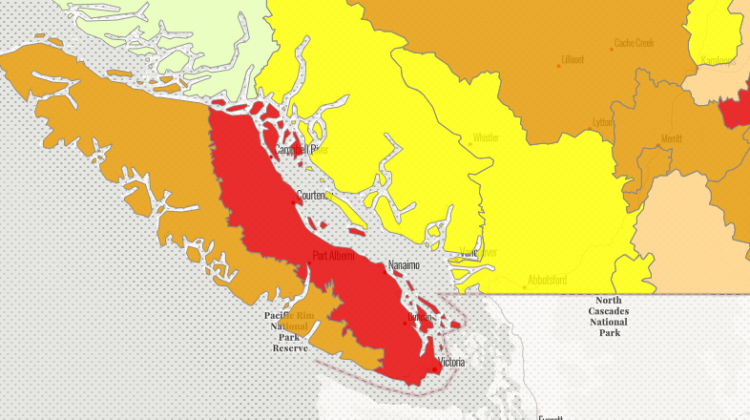 The BC Drought Levels Map shows most of the east coast of Vancouver Island in Level 4 drought conditions. (Supplied by the Province of British Columbia)

We could use a few raindrops right now.

Victoria was coming off its driest ever spring on record, and after a promisingly wet early June, a high pressure ridge arrived and never let up.

In fact, during the historic and deadly heatwave, all-time temperature records fell across B.C. including in Victoria, Nanaimo, Powell River.

Environment Canada meteorologist, Doug Lundquist, says there’s no relief in sight for people hoping for relief in the form of precipitation.

He says after July 7th, we’re into the hottest, driest part of the year and typically don’t see any rain until the latter part of August.

He added that the short term forecast offers more of the same.

“I can’t really see anything in the next few days, nothing significant more than a shower here or there, at the best, and not even much,” Lundquist said.

Lunquist says in terms of drought, we’re in a bad place.

The Sunshine Coast including Powell River and Sechelt remain at Level 1, where adverse impacts are rare.