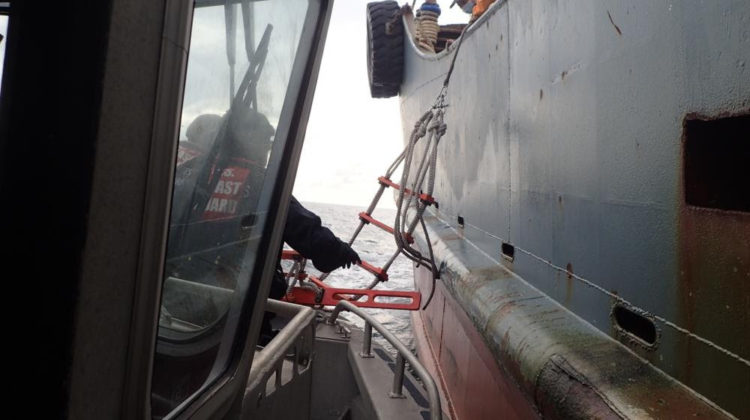 A team of Canadian, US, and South Korean fisheries officers have seized hundreds of illegally caught shark fins from ships in the North Pacific Ocean.

The team was engaged in Operation North Pacific Guard, a part of the effort by Pacific Rim nations to stop illegal fishing in international waters.

During patrols on the US Coast Guard cutter Bertholf, the team boarded 15 fishing vessels.

Sixteen of the violations are considered serious.

Four-hundred-and-50 sharks fins were seized from three vessels operating in a group.

Other vessels in that fleet refused to allow the fisheries enforcement team to go onboard.

Among the violations discovered was the use of prohibited gear, failure to maintain catch records, and improper vessel markings.

US Coast Guard Rear Admiral Nathan Moore says the inspections are part of a multi-national effort to stop illegal fishing in international waters.

Illegal and unregulated fishing and unreported catches are considered to be a global maritime security threat.

The UN’s Food and Agriculture Organization says illegal, unreported, and unregulated fishing causes the loss of 11 to 26 million tonnes of fish each year, at an estimated cost of $10-23 billion dollars.

In a study released in 2020, researchers at the University of British Columbia found many species of fish are targeted by industrial fishing fleets including illegal and unregulated ships.

It says the illicit trade in fish and seafood products contributes to the depletion of fish stocks.