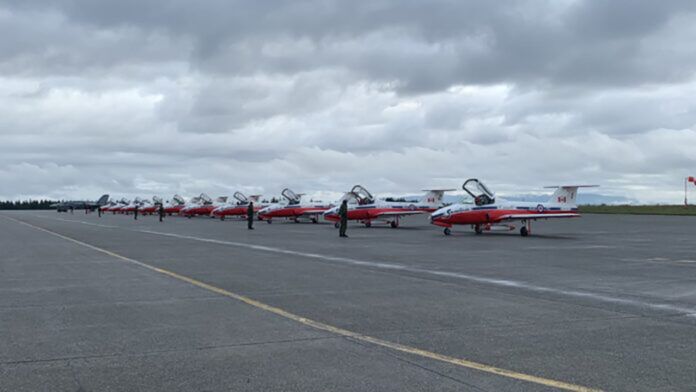 The Canadian Forces Snowbirds’ wings are clipped after an accident last week in Fort St. John.

The accident involving a 431 Squadron CT-114 tutor aircraft on Aug. 2 prompted the commander of 1 Canadian Air Division to put an operational pause on the fleet.

The Department of National Defence says the aircraft had an emergency during takeoff. They say the pilot was able to land but the plane was damaged.

The pilot was uninjured and an investigation into the accident is being done by the air force’s directorate of flight safety.

Maj.-Gen. Iain Huddleston ordered the pause after talking with the directorate of flight safety investigators and with experts from the Technical Airworthiness Authority.

“Given that the cause of this accident remains to be determined by the Airworthiness Investigative Authority, I have ordered an operational pause on the CT-114 Tutor fleet as we continue the investigation and commence a thorough operational airworthiness risk assessment process,” said Huddleston.

“We will return the fleet to flying operations when it is safe to do so, and in accordance with our rigorous airworthiness program.”

The fleet will not fly until an operational airworthiness risk assessment can be completed, according to National Defence.

As a result of the accident involving a 431 (Air Demonstration) Squadron CT-114 Tutor aircraft on August 2, 2022 in Fort St. John, B.C. the Commander of 1 Canadian Air Division has ordered an operational pause on the CT-114 fleet. pic.twitter.com/yTAEeiCYkU