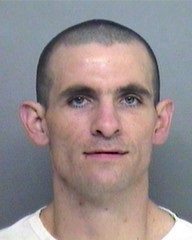 RCMP are looked for the public’s help in locating 31 year old Peter Anthony Alexander.
He is a suspect on three counts of Break and Enter, one of which occurred in Oak Bay, and 4 counts of Possession of Stolen Property.
Police say Alexander is a prolific offender who has an extensive criminal background and his current whereabouts are unknown.

He is a white man, about 5 foot 10, weighs 170 pounds with short brown hair and blue eyes.

He has a tattoo that spells “Pirate” on his left forearm and “Viva Loco” on his right forearm.
Police say he should be considered violent.