The first day of summer is National Aboriginal Day 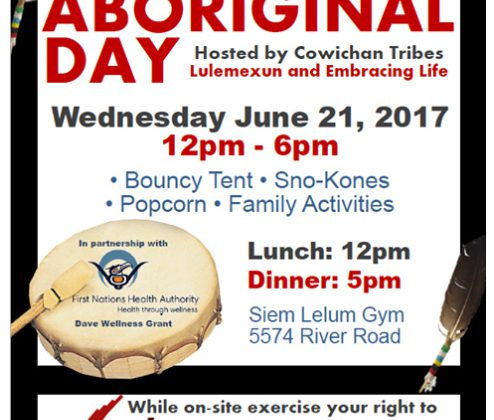 Events are taking place across the country to mark the day and acknowledge the contributions and history of First Nations peoples in Canada.
The Interim Director of Aboriginal Education at North Island College, Lou-Ann Neel says it’s an opportunity to raise awareness of the dark history of what happened to First Nations
Neel says National Aboriginal Day has helped to build bridges of understanding between aboriginal and non-aboriginal people.
The Cowichan Tribes have planned some family activities at the Siem Lelum Gym.
Chief William Seymour says it’s an important day and a good time for families to get together….
While at the event, Cowichan Tribes members are being urged to vote on the Cowichan Tribes Lands Code issue.  Tomorrow (Wed) is the last day to vote on the issue which would see Indian Affairs make an exit out of First Nations land issues.
VIU, in partnership with the Vancouver Island Regional Library, is showing some films in honour of National Aboriginal Day – they start at 11:15.
In Ladysmith, there will be events from 1 to 5 at Transfer Beach.
In the Nanaimo region, celebrations will be be held for the first time on Newcastle Island and at Maffeo Sutton Park.  The Snuneymuxw will celebrate their culture with live performances, traditional ceremonies, vendors and physical activities such as yoga, soccer, lacrosse and canoe races.