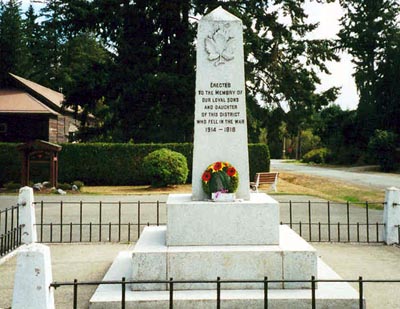 Picture Courtesy: Heritage B.C.
On Remembrance Day, we honour Canadian soldiers who died in combat, on October 21, there is a memorial honouring those who were killed in non-combat roles.
At 11 a.m., the Cobble Hill Cenotaph is the site of a memorial honouring those servicemen and women who died in peacetime, and on Canadian soil.
Organizer at the Royal Canadian Legion Malahat Branch, Mike King says this is the only branch in Canada that remembers those who were killed in non-combat roles and the goal is to get the ball rolling on a national level.

On October 22, 2014, Islamic extremists shot Corporal Nathan Cirillo in the back while guarding the National War Memorial in Ottawa, and it came just 48 hours before Warrant Officer, Patrice Vincent was killed in a hit and run, also perpetrated by Islamic extremists.

King says this event was sparked following those brutal attacks.

He says this year’s event goes on October 21 because it’s the Saturday that falls closest to October 22.

People should arrive at the memorial service early.