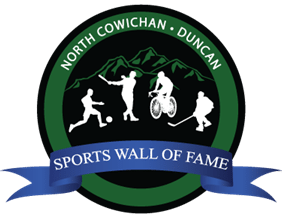 Five inductees were added to the North Cowichan – Duncan Sports Wall of Fame at induction ceremonies held on the weekend at the Cowichan Golf and Country Club.

Joining the accomplished list of Sports Wall of Fame members are Shona Shadlock who was recognized for her accomplishments in archery:

Glen Martin was recognized for his accomplishments in both golf and soccer:
Matt Ellison for his hockey achievements:
Gerry Hornett, who is now deceased, who started playing football with the Cowichan Timbermen and moved on to play in the CFL:
We caught up to Jack Rochon who was also inducted:
Rochon, a long time coach in the Valley in both hockey and baseball says there were many rewards throughout his career….
Rochon coached the Pee Wee Capitals in the early 80’s.
The team won almost 130 games in a two year span while only losing nine.
The championship game in 1984 was played in front of 1600 people at a sold out Cowichan Arena.
In recognition of his work, Jack was honoured with the BC Attorney General’s Award for fostering sportsmanship in the Province.

The videos used in this story are courtesy Kyla Habazin.