By Kyle Christensen
Thursday, Dec. 14th, 2017
Facebook
Twitter
ReddIt
WhatsApp
Email
- Advertisement -
The decrease in old-growth trees on Vancouver Island is an ‘ecological emergency.’
That’s according to Jens Wieting, the Forest and Climate Campaigner with the Sierra Club of B.C.
Due to an increase in old-growth logging on the island, more than one hundred thousand hectares of old-growth forest has been lost in the last ten years.
The Great Bear rainforest received more than $120 million dollars in conservation funding and Wieting says an Old Growth Protection Act needs to be adopted for Vancouver Island.

The increase in logging has resulted in nearly 11,000 hectares of old-growth forest being lost in the last year alone.

The Sierra Club, along with similar groups and First Nations communities are partnering in an effort to convince the provincial government to create an Old Growth Protection Act for Vancouver Island.

It would be similar to the one that’s currently in place for the Great Bear rainforest located between Prince Rupert and Bella Bella.
More information is available at http://sierraclub.bc.ca. 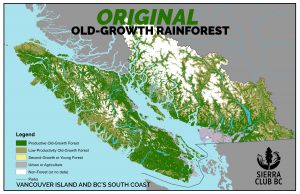 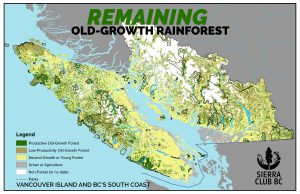