Tsunami Warning for west coast of Vancouver Island this morning 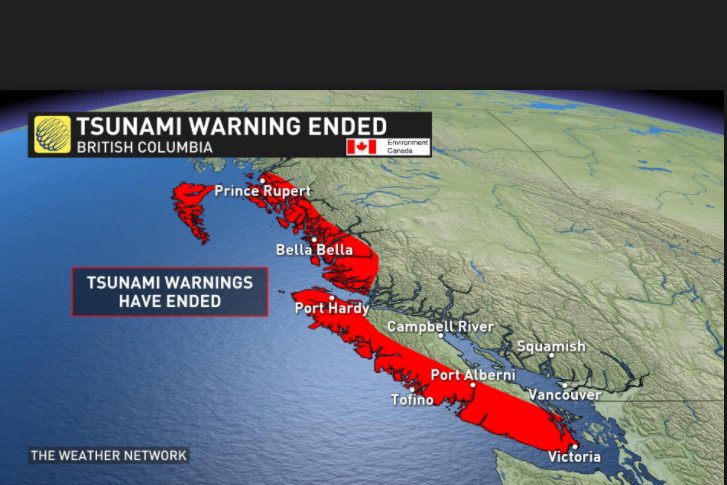 Tsunami warning sirens went off in Tofino and other west coast Island communities early this morning after a powerful earthquake struck off the Alaska coast.

Residents in the affected communities were woken by warning sirens including those from first responders, like police, fire and paramedics, going through neighbourhoods shortly after the quake, that had a magnitude of 7 point 9, struck at about 1:30.

People were told to move inland or to higher ground.

The warning was cancelled shortly after 4.

There was no tsunami warning for the Cowichan Valley this morning (Tues).
The CVRD’s Emergency Program Coordinator, Sybille Sanderson says, in the Georgia Strait we are at a lower risk of a tsunami, but during an emergency people can expect to be notified in a variety of ways……
In Tofino, residents were told where to go and Sanderson says in communities at a higher risk of a tsunami most people are aware of the muster points.
She says there’s no specific place identified here….
Sanderson says Cowichan Valley residents can sign up for alerts in our region through the CVRD website but she says those will only be activated if there’s action that needs to be taken.
Sanderson says, in the event of an emergency evacuation it’s a good idea not to use your phone so the network is available for emergency calls, have your emergency kit on hand and ready to go, don’t forget to check on your neighbours to make sure they know what is going on, and take your pets with you.
- Advertisement -
Facebook
Twitter
ReddIt
WhatsApp
Email
- Advertisment -
- Advertisment -
- Advertisment -