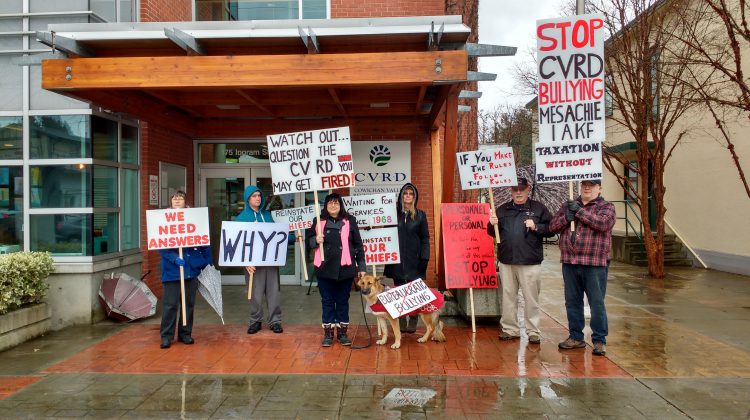 Members and supporters of the Mesachie Lake Volunteer Fire Department held a rally outside the C.V.R.D. office in Duncan.

At issue was the ‘operational pause’ that the Cowichan Valley Regional District board placed on the small fire hall along with the termination of Fire Chief, Gary Eve and Deputy Chief, Owen Robertson.

The ‘operational pause’ was meant to allow a third-party reviewer to take a look at the operation, the equipment, and the building itself, while the C.V.R.D. used the Lake Cowichan and Honeymoon Bay Fire Departments to service the community.

Eve says the decision to terminate himself and Deputy Fire Chief, Owen Robertson and appoint an unqualified chief flies in the face of the C.V.R.D.’s priorities surrounding safety.

Eve says the board’s decision to service Mesachie Lake with the Lake Cowichan and Honeymoon Bay Fire Departments increased response time, and with fire capable of doubling in size in a minute, this decision was a head-scratcher.

He adds that his lawyers told him to request the C.V.R.D. to make a list of the reasons for the termination, and he says he hasn’t received anything in writing.

C.V.R.D. Chair, Jon Lefebure has said that the board doesn’t discuss personnel issues.