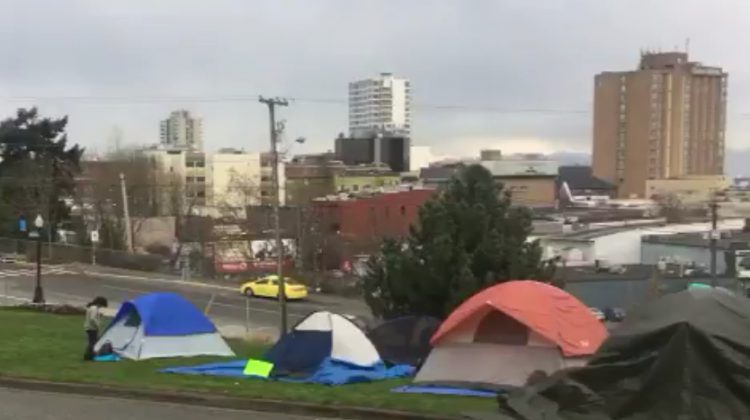 The City of Nanaimo is paying the price for not moving ahead with an affordable housing project as a homeless camp on the lawn of City Hall grows.
Councillor Bill Bestwick asked one of the organizers about the camp……
Matthew O’Donnell says the group wants urgent action on homelessness, some movement towards a permanent supervised consumption site and a drop-in centre where homeless people can go….
In the end, the city didn’t make any changes with regards to the path it’s taking in finding another suitable site for an affordable housing project.
The delegation was told there could be a drop-in centre in place for homeless people by the summer and the issue of a supervised consumption site was not at all addressed.
In the Cowichan Valley, governments are working on some affordable housing, however it’s a slow process.

There are three parcels of land in the C.V.R.D.’s jurisdiction that are earmarked for affordable housing, but North Cowichan Mayor and C.V.R.D. Board Chair, Jon Lefebure says a significant amount of funding is required to bring more units to the region.

North Cowichan is in a partnership with the Community Land Trust of B.C. and securing federal or provincial funding is the ultimate goal.

The process to bring affordable housing to communities under the C.V.R.D. umbrella requires either a referendum or an alternative approval process.

The decision on whether or not to hold an affordable housing referendum will be made before 2019.

It’s unknown how long this process will take.