A Community Gathering Urging Action To ‘Protect Our Waters’ 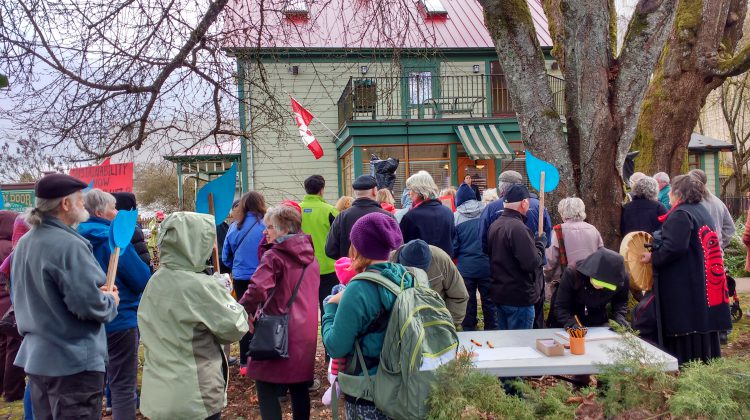 The federal government approved the controversial pipeline in 2016, and if the twinning of the existing infrastructure goes ahead, it would allow nearly nine hundred thousand barrels of oil to be shipped from Alberta to B.C. every day.

The theme of the gathering was ‘protect our waters’ and Cowichan-Malahat-Langford M.P., Alistair MacGregor says a spill in Burrard Inlet, at the terminus of the pipeline, would be catastrophic, even on a small scale.

Tasli Shaw is a Marine Naturalist at Ocean Ecoventures and studies all the inhabitants of the Salish Sea and she says it’s not right to put these marine species at risk to cash in on an outdated means of addressing our energy needs.

One of the main messages was the impending doom of many marine species, should Kinder Morgan’s pipeline expansion pass, and leak into B.C. waters.

Shaw mentioned the story of ‘Onyx’ the resident killer whale.

Onyx was orphaned when he was 13, and instead of remaining with family, he hooked up with an older female in another pod, liked the experience, and remained with the oldest females in that pod.

Protestors at the gathering announced that Green Party leader, Elizabeth May and Burnaby-South M.P., Kennedy Stewart were arrested in Burnaby at a Kinder Morgan protest earlier in the day, leading the crowd to cheer.