Group plans to hold politicians feet to the fire 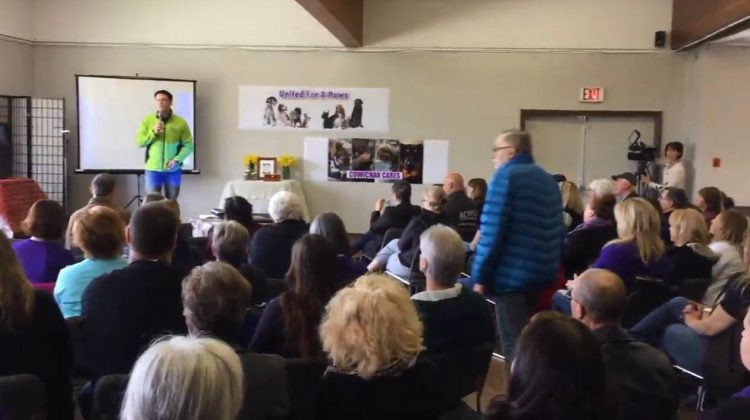 Packed house for United for a Paws advocacy event.
A new group in the Cowichan Valley saw overwhelming support for their mandate.
It was standing room only at the Duncan Lodge as more than two hundred people attended an information event related to animal cruelty bylaws.
One of the organizers, Kelly Olsen says the event is on the United for a Paws’ Facebook page and anyone who couldn’t attend can view it there (https://www.facebook.com/search/top/?q=united%20for%20a%20paws)……
She says the group, meantime, aims to hold our elected officials feet to the fire.
Olsen says our MP, MLA, and community leaders were in attendance and heard the community loud and clear……

The event was in response to the seizure and subsequent death of Teddy the dog in the Cowichan Valley, but there have been a couple of other cases in the Valley of late.

The include a pot bellied pig that was adopted from the SPCA and subsequently slaughtered by the owner, the beating death of a puppy and the case where a cat consumed ecstasy and was shaved before being thrown out a car window back at the owners’ property.