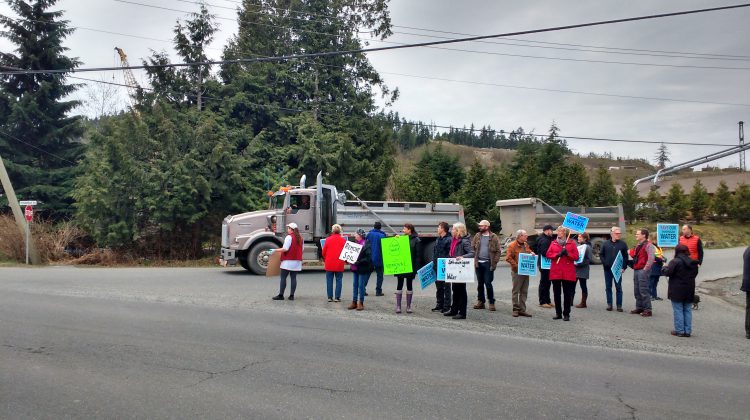 Picture taken at 'Rally for Removal' protest in Shawnigan Lake

Members of the Shawnigan Residents Association and other concerned community members held a ‘Rally for Removal’ at the intersection of Stebbings Road and Shawnigan Lake Road this morning.

Shawnigan Lake Area Director, Sierra Acton says this protest is meant to serve the Ministry of Environment with a reminder that the closure of the Cobble Hill Holdings’ soil-dumping site simply isn’t good enough.

The company’s operating permit was pulled last year and Biologist Bernhard Guurlink says the facility wasn’t built properly and he expected the contaminated soil would leak.

Cowichan Valley Green Party M.L.A. Sonia Furstenau says this soil has to be removed before the environmental impacts pass the point of no return.

Guurlink says the installation of the sand blanket, on top of the plastic liner under the soil, was a disaster from the start, as excavator tracks gouged the liner, resulting in dozens of holes to the liner and subsequent patches.

Guurlink says there is evidence that the contaminated soil is leaking through the liners.

Furstenau has introduced a private members bill in the legislature, asking for the amendment of the Environmental Management Act, preventing the use of quarries and gravel pits as landfill sites.