Options to move on the Malahat dwindling 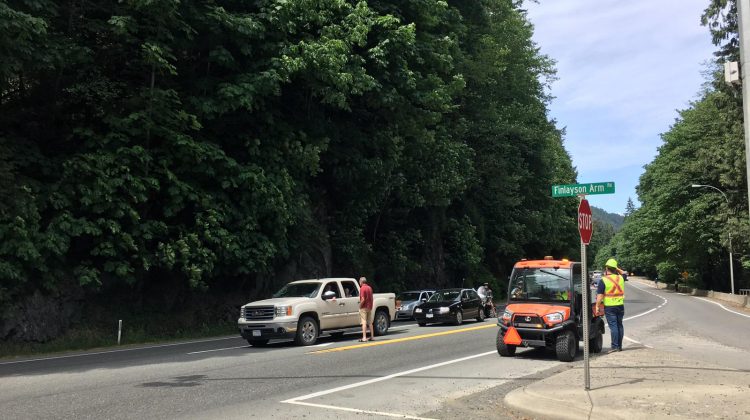 Crews are assisting people in traffic with water, bringing portable toilets to the site, letting folks know about estimated wait times and current detour routes, and checking on anyone with possible health issues.Photo credit: Ministry of Transportation and Infrastructure.

An accident on the south end of the Malahat today has resulted in a complete road closure at Goldstream Park. The Ministry of Transportation and Infrastructure says it’s causing considerable delays for travellers and now crews are out offering assistance to motorists in the traffic queues by providing water and bringing in portable toilets, letting people know about the estimated wait times and detour routes.

They are also checking on anyone with health issues.

The detour was onto Finlayson for both northbound and southbound traffic but now there’s been an accident there and it’s closed too and no longer an option.

The Ministry is also suggesting motorists take the Pacific Marine Circle Route through Port Renfrew or may want to travel between Swartz Bay and Fulford Harbour on Salt Spring Island.

BC Ferries has also called in additional staff to accommodate the unforeseen traffic volume at the Brentwood Bay-Mill Bay crossing, and is providing three extra round trip sailings.

The initial accident involved a fuel spill and that’s taking crews longer to clear the scene.

Drive BC is estimating the Malahat won’t be open until 4 Friday morning.