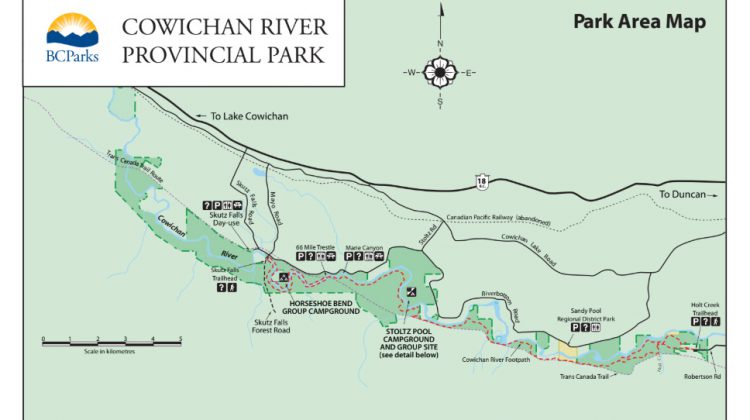 The Cowichan River Provincial Park contains a gun range near the Glenora trailhead.
The Cowichan River Neighbourhood Association has upped the ante in its fight against the Cowichan Fish and Game Association’s gun range.
The Neighbourhood Association’s Bob Kopp says they’ve submitted a report to the Ministry done by the Environmental Law Clinic at the University of Victoria.
The Park is located near the Glenora trailhead.
The report says the gun range, an anomaly in the British Columbia parks system, should be phased out, that gun clubs are not permissible activities in parks, and there are concerns over lead pollution on the environment and human health.
Kopp says the issue has been brewing since Parks took over the land the gun range sits on in 2004…..
B.C. Parks, in an emailed statement to Juice FM, says when the site was added to the park the Cowichan Fish and Game Association agreed to give up their lease to the Crown land they were on in exchange for a park use permit.

The gun range pays 3,000 dollars per year to use the land.

BC Parks has received complaints about the noise from the gun range from adjacent residents and has been working with the Cowichan Fish and Game Association for the past 2 years on ways to mediate the noise.

Kopp is urging residents to participate in the management planning process to develop the Cowichan Provincial Park Management Plan.

You can find a link to the process at:  http://www.env.gov.bc.ca/bcparks/explore/parkpgs/cowichan_rv/
BC Parks will also be scheduling meetings with First Nations and key stakeholders (such as the Cowichan River Neighbourhood Association) as well as hosting open houses.
The open houses will be advertised on the BC Parks website.
We did contact the Cowichan Fish and Game Association but they declined to comment.