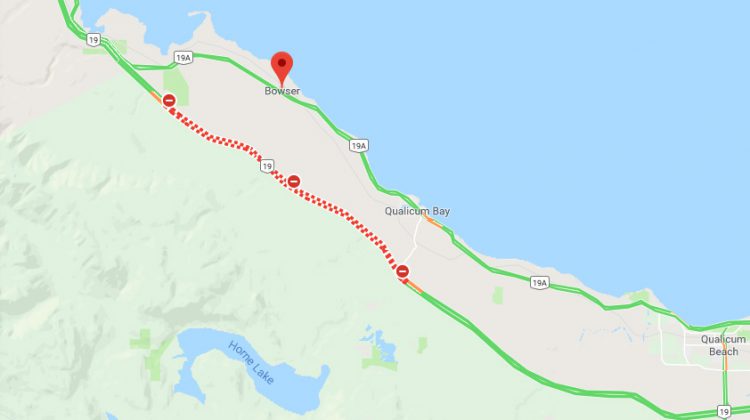 This screenshot from Google indicates where Highway 19 is closed in red.

FANNY BAY, B.C- The closure of Highway 19 south of the Comox Valley area has been extended.

For the past three days, the closure has been in place along a 12-kilometre stretch of the Inland Island Highway, with a detour between 6 a.m. and 9 p.m. re-routing drivers onto the Old Island Highway h

The detour is in place to allow for filming for the Sonic the Hedgehog movie, which is shooting a car chase scene along the highway.

While the closure was supposed to end tomorrow, an extension has been put in place due to weather delays. According to Joan Miller of the Vancouver Island North Film Commission, a weather extension was always part of the plan when it came to filming.

“As we all looked out the window for the last few days, we know there has been a lot of rain in the area,” said Miller.

“We know they’ve been filming in between, trying to get as much of what was required as possible, but they were not going to make it through in the first five days, so they’ve asked to use the extension.”

While Miller couldn’t speak to what the production might do if more time is needed, she believed the shoot would finish in time.

“Right now, they feel that they’ll be able to capture what they need, and the 17th was just an additional day in case it was needed,” said Miller.

“At this point, they’re hoping they can get it done, and they can move off to the highway and get down to Ladysmith, and film the sequences in Ladysmith.”

Miller also said that there have been great responses from Fanny Bay businesses due to the increase in traffic along the detour.

“There’s inconveniences to some who may have to wait a little long to back out of their driveways, but there’s been a lot of benefits along with some donations to charities by the production,” said Miller.

“It all depends on people’s attitude, and I will say that the majority of the public have been wonderful.”

She also mentioned a campaign by the Fanny Bay Inn to get star Jim Carrey to come by for a meal, which has used signs outside the restaurant to grab attention.

“I’m following that sign closely, and I’m sure if the sign changes, saying he’s been in for lunch, we’ll all find out about it at the same,” said Miller.

The majority of the Vancouver Island shoots for the movie are in Ladysmith. The film stars Jim Carrey, James Marsden and Tika Sumpter, and has a budget above $7 million.