Activists arrested from Rutherford School leave behind a mess 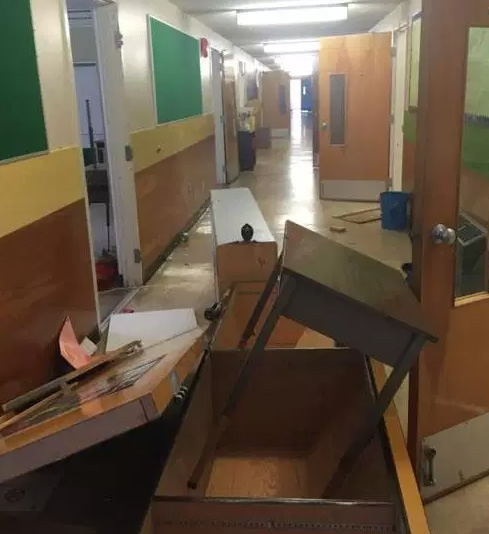 RCMP removed and arrested more than two dozen people who were squatting in Rutherford Elementary School in Nanaimo.

Steve Rae, chair of the Nanaimo-Ladysmith school board says a group of radical political activists broke into the school Friday night and in 24 hours may have done as much as 100,000 dollars in damage.

“They had blown out some doors on the main floor to get into the building. They had overturned equipment that we have in there. They had secured and locked up every door, drilled into them, they drilled into the roof of the building to hang their signs. So, now we have a rain issue. They broke windows, tore stuff off walls.”

Rae says there were a lot of drugs found on the premises too.

He says the people involved were not from Nanaimo’s tent city but rather activitists and anarchists from Vancouver and other parts of the province.

RCMP say 27 people, in all, were arrested.

Mounties say at the time of the occupation, the attending officers did not know exactly how many protesters were in the building, what their intentions were or if there were any weapons.

Given those factors, it was decided to secure the outside of the school for the evening then reassess the situation in the morning.

Constable Gary O’Brien says around 4:30 in the morning, three individuals attempted to leave the school and were promptly arrested and taken into custody.

Around 10:30 Saturday morning, officers with the Vancouver Island Tactical Response Unit, Vancouver Island Emergency Response, Police Dog Services and various other officers entered the building and began the process of locating and arresting the protesters.

O’Brien says the arrest of the protesters was slightly hampered after many of them choose to congregate on the roof of the school.

To facilitate their safe removal, the City of Nanaimo Fire and Rescue loaned out one of their fire trucks with an extension ladder to assist officers in taking them off the roof and into custody.

26 of the 27 arrested have been charged with break and enter and mischief.

The remaining individual was not immediately released due to outstanding warrants.