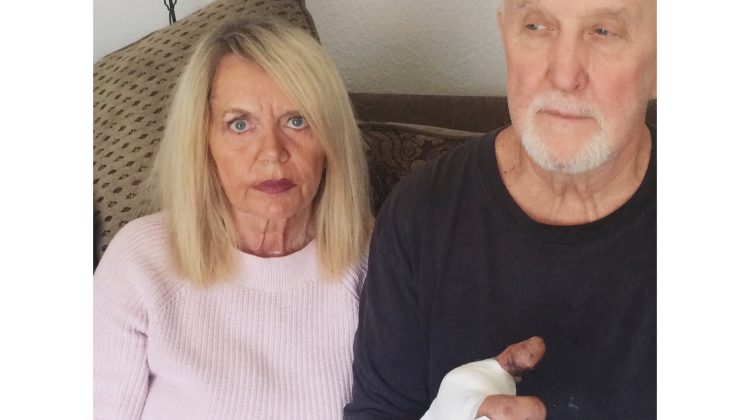 Shirley Bowick and Roger Nepper are pictured in their Port Alice home. Image courtesy of Shirley Bowick, adjusted to fit this website.

Back on September 11, 2018, the pair were injured by an exploding package in their home in Port Alice, a small village in Northern Vancouver Island. The package is believed to have been sent by Nepper’s brother, Leon, who had been living in Whitehorse.

When Roger brought the package home from the post office and opened it near Bowick, it exploded, blowing off the fingertips of his right hand and sending nails into his stomach. Bowick suffered minor burns.

Soon after, Leon was arrested by the Yukon RCMP and charged in connection to the incident. While his case was going through the early stages of the court process, he died after going into medical distress while in jail.

While Roger has been released from hospital and both are back home in Port Alice, Bowick has told the MyTriportNow.com newsroom that bills have been mounting, in between travel for Roger’s medical care and repairs they need to make to their house, after the bomb caused damage.

She has now decided to ask for help.

According to Bowick, they’ve had to go back and forth to Nanaimo multiple times already, with another trip in two weeks to take pins out of Roger’s thumb. She expects the travel to last for the next several months to a year.

She also indicated that Roger’s stomach damage had been severe, with a possible need for skin grafts.

Costs from the travel down-Island have been mounting, according to Bowick, with additional money being spent on accommodations and food. There have costs from repairs to the house as well, with shrapnel, burns, and blood still present in the bathroom of their home.

“Blood just keeps coming up, but I’m just going to throw runners over that,” said Bowick.

“I don’t expect new carpeting. But I have to get all my walls washed, because they’re a mess, and it’s just so much to take in at one time.”

Bowick said the current costs are beyond their financial means, and offers of help have not been forthcoming. While she expects some assistance from Victim’s Services, she doesn’t believe it will be enough to make a difference.

To that end, she’s asking for anyone who can help them out to feel free, with a focus on funds to help with the travel costs.

“We wouldn’t be eating in any fancy place, just breakfast and supper, that are cheap, reasonable dinners,” said Bowick.

“My husband has a hard time eating right now anyway, he can’t use his right hand and he’s right handed. I have to cut things up, and it can only be certain foods that he can actually eat, right now.”

Bowick said that medications for Roger have also been a cost, and indicated both her and Roger were stressed from care in the wake of the incident. Prior to the blast, Roger had been taking care of her, due her medical issues.

She indicated that they couldn’t leave the village for multiple reasons, including the financial impossibility of moving closer to care and all their friends being in Port Alice.

Bowick’s daughter Melanie has since launched a GoFundMe page, which can be found here: https://www.gofundme.com/medical-and-trauma