The pros and cons of pro-rep debate goes on 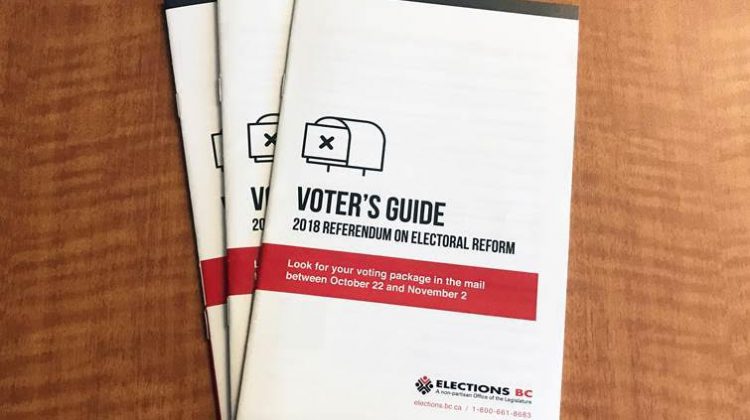 More than 3 million ballots were mailed to registered voters in the province-wide electoral reform referendum.

Less than 3 per cent of them have been returned to date and we only have until the end of November to get the ballot returned, with postmarks of November 30th being unacceptable.

“The ‘no’ campaign which would include all of the Liberal MLA’s, including Andrew Wilkinson and the No B.C. PR Society which consists of Bill Tieleman and Susan Anton and Bob Plecas are spreading all kinds of misrepresentations and untruths about pro-rep.”

For more information on the different proportional representation systems go to fairvote.ca or prorepfactcheck.ca.

You can put your ballots in the mail or return your ballot to one of the more than 70 referendum services offices around the province.

Cowichan Valley MLA, Sonia Furstenau, a proponent for proportional representation, said Mixed Member Proportional is one of the most common pro-rep systems used in the world.

“What we would have seen is probably one more Green elected on Vancouver Island and three more Liberals and so there would be Liberal representation on all parts of Vancouver Island because the Liberals got, you know, in our (Cowichan Valley) riding, Steve Housser, I think, came in around 30 per cent. So we would have an outcome that more closely reflects what the voters actually voted for.”

If you have read the brochure sent to households a couple of weeks ago, there are still some unknowns when it comes to Mixed Member Proportional because they will be determined by an all party legislative committee after the vote.

But Furstenau said the foundational aspects of the proportional systems being proposed won’t change and those are that we would have local representation, the ballots will be simple, and there would be no huge increase to the number of MLA’s.

The MLA for Parksville-Qualicum said this whole referendum on electoral reform is flawed.

Michelle Stilwell said politicians should have been hands-off from the beginning because the question has become more about parties, than people.

Stilwell said the process was flawed right from the beginning.

She said the issue of electoral reform should have been fleshed out by a citizens assembly and politicians should not have been involved.

The assembly could have completed a fair and unbiased investigation and presented the results to the voters with all the facts and all the information so we know what we are voting on.

She said there are far too many unknowns in this referendum to make an informed decision.