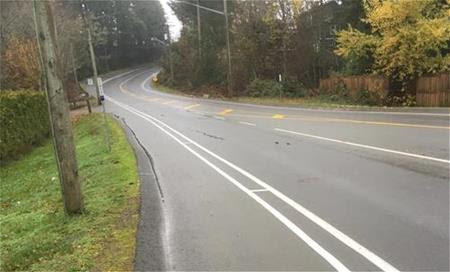 If you have been on Maple Bay Road recently you may have noticed some new line paintings.

They are called a gore and are double white lines painted along the shoulders of the road.

David Conway, Director of Engineering with North Cowichan said the intention behind the lines is to create a little more separation between motorists and pedestrians or cyclists without the costs that might be associated with some kind of physical barrier.

Conway said the idea to use a gore came from similar applications in the City of Victoria where bike traffic is prevalent.

He said the gore is not intended to be cycled within, but rather helps cyclists and pedestrians by giving them a little more protection from side mirrors and vehicle overhang.

Conway said the response to the new markings has been very positive and additional signage is in the works to make sure everyone knows the purpose behind the markings.