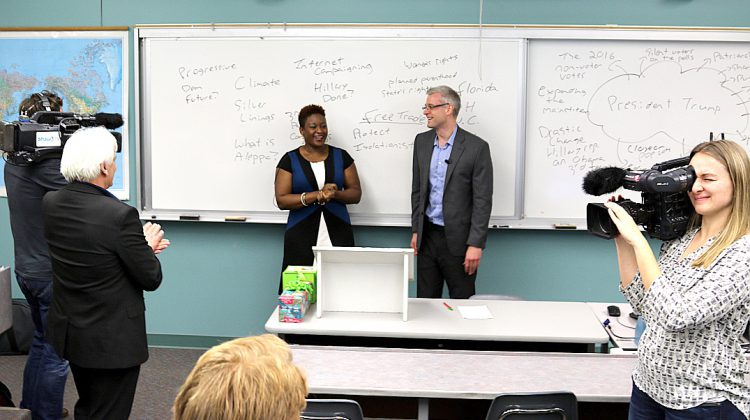 File photo: Cameras roll while Political Science professor, Dr. Alex Netherton (left), watches his friend and colleague Mark Williams receive an award for exceptional teaching from show producer Bisola Alabi while his students look on. Williams is being featured on the Shaw TV program Teachers Above and Beyond.

Tomorrow, (Sat), the U.S. shutdown will become the longest in history.

There’s still no end in sight in the deadlock that was prompted when U.S. legislators refused to approve 5 point 7 billion dollars in spending for a border wall.

Meanwhile, about U.S. 800,000 workers, more than half of whom are still on the job, missed their first paycheck today (Fri).

Vancouver Island University political science professor, Alex Netherton said Canadians are going to start to feel the effects of the shutdown too.

“It will affect us in travel, scientific, conservation or intergovernmental relations areas. They are on hold. You can put that on hold for a short period of time but over a longer period of time it gets to be a dent.”

Air travel is expected to be affected because American Customs and Border Protection officers, who handle travelers going into the U.S., won’t be fully staffed.

Businesses that export to and import from the U.S., like grocery stores and restaurants, are expected to feel the impacts too because the produce requires checks by federal workers in the U.S. to ensure they meet specific standards.

Netherton said the shutdown could go on for some time.

“A president can be in power basically without support from congress for a full term. They can go for years without getting key parts of their legislated mandate passed. It’s a system that’s supposed to be based on a mutual compromise and consent but in recent decades there’s been less compromise and more dissent.”

We also asked Netherton to weigh in on the Canada China situation.

He says Canada got caught in the crossfire of two titans.

Early in December Canada arrested a Huawei executive at the request of the United States for allegedly violating U.S. trade sanctions against Iran .

The arrest has strained our relationship with China but Netherton doesn’t believe it will affect the rate at which the Chinese are coming to Canada to work and attend our post secondary institutions.

“The Chinese government had abandoned, years ago, the notion of directing students where they should go to study. Young Chinese travel to Canada to study or to work. It’s a very cherished thing in China to be able to go the the West and get an education or work experience and go back.”

VIU has more than 2,000 international students.

According to the Globe and Mail Canada’s universities have a lot at stake.

Chinese students make up a third of their foreign enrolment, and contribute about 5-billion dollars in total revenues to Canada.

Last August Saudi Arabia suspended government-funded scholarships for their citizens in Canada after the Canadian government criticized the Saudi state over human rights.

There were 93 of Saudi students enrolled at VIU but not all of them were government-funded and self-funded students were only encouraged to leave Canada.

Netherton says, of China and Canada, “I don’t think our relationships are going to be what they were but I don’t think that we are the central figures to resolve this. We can’t release this person, it’s against our laws, we can treat this person very well. We have to go through the process of law. We are not in a position to go, oh, I’m sorry, we will just pretend that didn’t happen.”