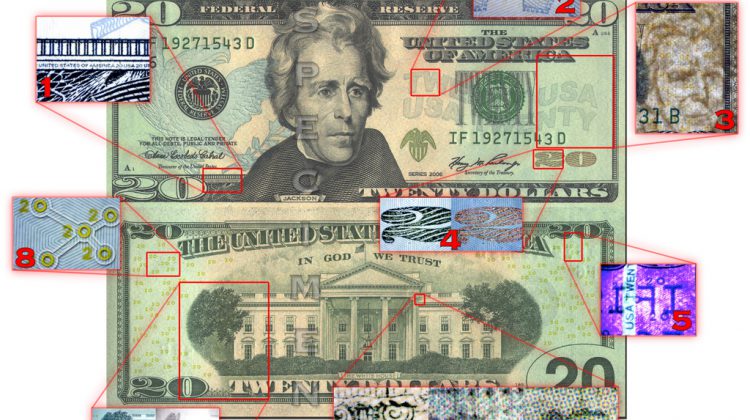 Due to the increasing availability and quality of desktop publishing software and printer/scanner technology, the US Treasury department introduced a re-designed twenty dollar bill in an attempt to thwart counterfeiting. The bill features many high tech security features that are extremely difficult or impossible to reproduce using commonly available publishing technology.1. Microprinting under the border to the left of Andrew Jackson's portrait says "THE UNITED STATES OF AMERICA 20 USA 20 USA"2. Microprinting around the first three letters of each line to the left of the Treasury Department seal repeats "20 USA"3. A watermark embedded into the paper the bill is printed on depicts a portrait of Andrew Jackson that is identical to the one printed on the face of the bill.4. The 20 on the bottom left of the front of the bill is printed using color-shifting metallic flecks. Changing the angle at which the bill is held will change the apparent color of the printing from gold to green. Additionally, the eagle and shield image is printed with an embossed sparkly ink.5. A mylar security thread runs vertically 17mm from the edge of the paper. This strip will glow green when exposed to UV light and has the microprinting of "USA TWENTY" along with a US Flag. Instead of stars, the miniature flag has the number 20 printed.6. The bill is printed using an engraving process that is able to reproduce extremely fine lines (first image). When the bill is printed using a commercial inkjet (second image) or laser printer (third image) the fine lines are obscured and colored ink spray is clearly visible under high magnification. The images were taken at 100x magnification.7. The back of the bill is printed with two types of optically indistinguishable ink. Under infrared light (second image), a vertical strip of printing on the left side of the note disappears. The inks used to create the bills also have varying magnetic properties. These two features are extremely diff

The North Cowichan/Duncan RCMP have made an arrest in connection to the passing of counterfeit bills around the Valley.

Two suspects, aged 46 and 33 have been arrested and face nine separate counts in relation to passing counterfeit currency.

The pair is from the Westholme area.