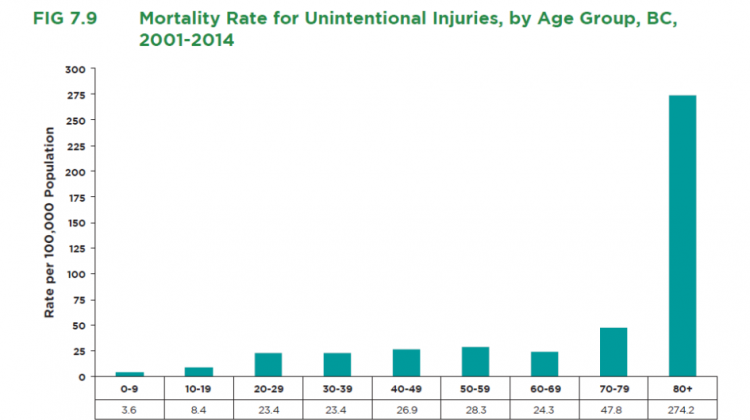 The provincial health officer says, overall, the health of British Columbians is good, but there are several areas where we could do better.

She said injuries are still the leading cause of death and hospitalization in B.C.

“Falls, particularly in the elderly, overdoses, especially in young men and the third major area is motor vehicle crashes.”

She said there are regional disparities, for example, motor vehicle accidents are more likely to happen in rural areas.

“One of the things that I worry about is hazardous drinking, so binge drinking has gone up in young women and men of reproductive age.”

She said for the first time in 30 years life expectancy in B.C. has fallen by 3 months.

She is offering seven recommendations:

1. Establish a legislated health in all policies approach in B.C., using a health impact assessment model that includes a requirement for assessing health and equity impacts for all proposed, new or revised policy, legislation or programming across the B.C. government.

2. Develop and implement a comprehensive health-promotion strategy that recognizes sex- and gender-specific health needs, and supports all gender identities and sexual orientations through appropriately targeted interventions.

3. Increase support for government programs and policies across government that focus on health among women (including pregnant and post-partum women), children, youth and families.

4. Increase the focus on illness and injury prevention, as well as health promotion, for people living in rural and remote areas.

7. Commit to increasing the proportion of health authority budgets allocated to population and public health to 6%.